This Chinese Submarine Could Drop a Nuclear Weapon on America 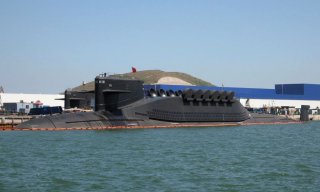 Here's What You Need To Remember: The nuclear submarine club is indeed a highly exclusive club—and those with nuclear ballistic missiles even more so. The real issue is how quiet the Jin-class is.

China’s Type 094, or Jin-class nuclear submarines are capable, but they may be tools for promoting national prestige rather than true nuclear deterrence.

The Type 094, or Jin-class as it is also known, is operated by the People’s Liberation Army Submarine Force. The Jin-class is a ballistic missile submarine that has an onboard nuclear reactor for propulsion. It is China’s second generation of nuclear-powered submarines and is a direct successor to the Type 092, or Xia-Class of nuclear subs. The Jin-class was first launched in 2007, and became operational sometime in 2010. A total of 8 Jin-class hulls are believed to exist, though the class may ultimately grow to a total of 12 hulls.

Although the distance from Beijing to Los Angeles is over 10,000 miles, a Type 094 submarine on patrol near Alaska would be able to hit the majority of the United States with the JL-2. The Type 094 began conducting nuclear deterrence patrols sometime in 2015.

China’s defense industry is notoriously tight-lipped about advancements in weapon systems. It is therefore difficult to ascertain with an absolute degree of certainty how quiet the Jin-class really is. It has been suggested that the Jin-class may be quieter than the Typhoon-class—Russia’s quietest and most technologically advanced nuclear-powered ballistic missile submarine.

While most nuclear-equipped ballistic missile submarines rely on the ocean for survivability and ensure a second-strike capability, China’s strategy with the Jin-class may be a milder form of deterrence coupled with national prestige.

The nuclear submarine club is indeed a highly exclusive club—and those with nuclear ballistic missiles even more so. The real issue is how quiet the Jin-class is.

A report from the Office of Naval Intelligence stated that China’s Jin-class is the “first credible at-sea second-strike nuclear capability.” The Department of Defense concurred in a 2016 report stating that, “together these [the Jin-class and the JL-2 ballistic missile] will give the PLAN its first credible long-range sea-based nuclear capability.”

Assuming that it is not as quiet as has been hyped, the Jin-class may serve as deterrence in a local theater of conflict (i.e., the South China Sea), rather than as a truly global nuclear deterrence tool.