The Conflict in Ukraine is Getting Very High-Tech 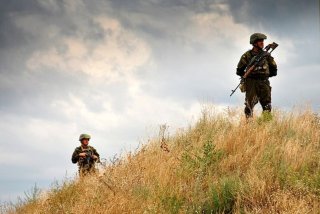 Here's What You Need to Know: In the past, Ukraine harbored a major share of the Soviet Union’s military-industrial sector, building Antonov transport planes, T-64 tanks and even aircraft carriers. Ukraine is seeking to leverage that industrial base to strengthen its hand in the conflict in Eastern Ukraine.

For several years, Ukrainian troops have been locked in a “frozen conflict” with Russian-backed separatists for control of the Donbas region in Eastern Ukraine. The maneuver warfare and urban/airport siege phase of the conflict ended in 2015. Now the opposing forces glare at each other across no man’s land from fortified outposts and periodically lash out with sniper fire, artillery and mortar barrages, or even precision-attacks delivered by anti-tank missiles.

When the slightest exposed movement spotted by adversaries could provoke a deadly bombardment, it’s easy to understand why Ukrainians are seeking to introduce robotic vehicles to minimize the risks to flesh-and-blood combatants.

In the past, Ukraine harbored a major share of the Soviet Union’s military-industrial sector, building Antonov transport planes, T-64 tanks and even aircraft carriers. Ukraine is seeking to leverage that industrial base to strengthen its hand in the conflict in Eastern Ukraine.

The most high-profile Ukrainian Unmanned Ground Vehicle (UGV) is the Fantom, a 6x6 first unveiled at a defense exposition in 2016. The diminutive robotic fighting vehicle is only one meter tall and three meters long, and can carry a 12.7-millimeter machine gun, or a pop-up turret mounting four Ukrainian-built Barrier anti-tank missiles that can bust tanks up five kilometers away.

The pop-up launcher could allow the low-profile vehicle to hide safely behind cover, with only its raised launcher exposed to picks off enemy tanks. However, the Fantom more routinely could be used for reconnaissance missions, or to lug up to 770 pounds of cargo—conceivably delivering food and ammunition to isolated outposts, or even medically evacuating wounded soldiers from combat.

The Fantom is manually controlled from a Ground Control station (basically an extra-large laptop case with two monitors and embedded control sticks) which transmits orders across both a fiber-optic cable link which can extend 5 kilometers and a radio link with a range of ten kilometers. The operator benefits from one 360-degree focused camera and five fixed all-aspect cameras for situational awareness, all of which are day/night capable.

At this juncture, it’s worth noting that remote control appears to remain the Achilles Heel of UGVs, as unlike high flying drones, UGV radio-links are easily disrupted by terrain features and building—or worse, enemy jamming and electronic warfare. Most UGVs in operational use today are demining robots, in which the operators can remain within line-of-sight of the vehicles. However, for a combat drone, operators would ideally be situated at a safe distance, removed from enemy fire.

However, when Russian combat-tested the Uran-9 in Syria, a heavier and theoretically more advanced robot fighting vehicle, it found that a system that supposedly had a 3-kilometer range only reached out an impractical 400 meters in lightly urbanized terrain. Thus, the Fantom’s practicality will depend on the robustness of its data link and fiber-optic cable under realistic operational conditions.

Power generation and endurance is another UGV design challenge. The Fantom uses a hybrid propulsion system with a separate engine for each of its three pairs of wheels, and a 30-kilowatt capacity generator which draws upon twenty liters of stored fuel to propel the vehicle to a maximum speed of 23 miles per hour. The generator periodically activates to replenish the battery but can be suppressed if thermal stealth is important. The Fantom can be recharged from the power grid in ninety minutes.

In 2017, a larger 8x8 Fantom 2 model was exhibited, this time with a turret capable of mounting a twin-barrel 23-millimeter cannon for blasting infantry and light armored vehicles, or a rocket-pod loaded with twenty 80-millimeter rockets. The 2.6-ton vehicle’s 80 kW generator can sustain speeds of 37 miles per hour and its datalink supposedly has a 20-kilometer range. Reportedly, the Fantom 2 attracted interest from potential North African and Middle Eastern clients.

In contrast to the beefy Fantom 2, Ukrainian firm Global Dynamics recently unveiled its 4x4 Iron Clad UGV weighing only 1.2 tons, with an articulated two-segmented configuration with sophisticated all-terrain capabilities. Like the Phantom, it has a dual fiber-optic and radio-link control system and hybrid diesel-electric propulsion—though the 12 kW generator means the vehicle can only jog at 12 miles per hour. However, the Iron Clad’s modular armor is reportedly only six millimeters thick—barely enough to protect against small arms at long range.

An optional remote weapon station on the front segment can carry a stabilized heavy or medium machine gun, which is accurate within a 5 centimeter-radius on targets one kilometer away. The rear segment has a cargo bay which can accommodate 300-pound cargoes, or significantly less if the weapon station equipped. The robot has an endurance of four hours fully-loaded, or up to ten with lighter payloads.

The little UGV is patrol and reconnaissance-oriented, with integrated thermal cameras and rangefinder. Theoretically, the robot could rove around infantry squads and outposts, performing boring but potentially dangerous patrol routines.

An even smaller 680-pound drone, the Laska (“Weasel”) developed by Infocom, resembles a machine gun-armed quad bike. The Laska is powered by a 19-horsepower motor and boasts an extensive array of sensors. The machine gun supposedly has a track-and-engage “Hunter Killer” capability. However, the Laska appears designed for much shorter range use within 100 to 300 meters of the operator—who can command the vehicle using a robotic “smart glove.”

However, proclamations at press junkets to the contrary, it’s not clear how soon these UGVs will enter service with the Ukrainian military—or if they will at all. The lack of verified orders could mean the Ukrainian Army is not prioritizing the UGVs, or that it is interested but lacks necessary funds, or that the trials and testing for entry into service are simply happening quietly behind the scenes. One factor that must weigh heavily is potential UGV susceptibility to electronic warfare, which Russian forces have ruthlessly used to deadly effect in the Donbas war.

Nonetheless, the principles behind remote-control vehicles are simple enough that in 2016, Ukrainian citizens crowd-funded the development of a Myslyvets (“Hunter”) robot carrying a 12.7-millimeter machine gun and a camera sight for the equivalent of $10,000, as detailed in this article by the Digital Forensic Research Lab.

In December 2016, the primitive-looking “Hunter” was commanded via a laptop computer to direct machine gun fire at separatists taking cover in a house in Avdiivka, Ukraine, as seen in this video. One can’t imagine the Hunter was a particularly accurate firing platform, but that may be less important for the purposes of suppressing enemy troops.

Afterward, the Kiev-based “Robotics” firm began selling a “Hunter 2” model that was upgraded with an infrared camera, an encrypted datalink, a 36-hour battery life, and a streamlined laptop control system. In May 2018, the Ukrainian Army reportedly began formally testing the Myslyvets, claiming it would have application for casualty evacuation and potentially could mount heavier weapons such as automatic grenade launchers or anti-tank guided missiles.

The Hunter 2 still resembles a cart with a machine gun on top—but if it gets the job done at a cheaper cost, that may make it easier to rapidly introduce into the service, despite limitations it may have compared to more exquisite prototypes.

Of course, a paradoxical outcome of using drones to reduce the risk to humans while waging war is that it can make it easier for societies to wage those wars perpetually, as evidenced by the United States’ endless drone wars. As the robotization of twenty-first-century warfare seems increasingly inevitable—in part because it can be implemented relatively cheaply, as demonstrated in Ukraine—one can only hope that tendency won’t end up costing more lives than it saves.