Copied but Deadly: How China Turned Russia's AK-47 Into Their Own Type 81 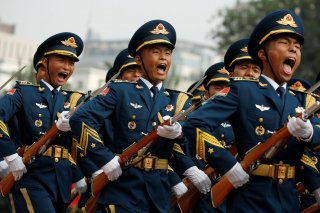 Key Point: This rifle was very useful, but it wasn't a permanent fix. Here's how Beijing used it.

In the 1980s, China’s small arms were largely inferior to the United States and Russia.

The PLA was mostly armed with the Type 56 assault rifle, a clone of the original AK-47, and the Type 56 carbine, a clone of the Soviet SKS. There was an abortive attempt to combine the characteristics of these rifles in the 1960s which culminated in the Type 63, an SKS-looking select-fire rifle that used elements of the AK operating mechanism such as a rotating bolt and fed from AK magazines. The Type 63 was too heavy and lacked a pistol grip and inline stock to afford controllability in fully automatic fire. It was an outdated rifle when it was introduced, especially compared to the American M16 and Soviet AKM.

The PLA realized this and began development of a new 5.8mm caliber the rifles for it, which eventually became the QBZ-95. However a “stopgap” rifle was needed, to quickly replace the Type 56 AKs. From this requirement, the Type 81 was born.

The Type 81 was not meant to be just a rifle. It was meant to be a test of the Chinese ability to develop small arms on its own, instead of simply adapting other designs. Unlike the Type 63 carbine before it, the Type 81 used a gas system of purely Chinese design. It also addressed flaws of the earlier rifles in light of combat experience in the Sino-Vietnamese war. In an attempt to make the rifles more modular and adaptable, the integral folding bayonet of the Type 56s and Type 63 was scrapped in favor of a removable knife bayonet and the provision to mount an underslung grenade launcher. The barrel was also lengthened and given a spigot to allow the Type 81 to launch rifle grenades. It also featured a novel sighting system, ditching the AK and SKS rear leaf sights in favor of a shielded aperture that resembled the early M16s.

The earlier Type 56 assault rifle was also considered to have too poor accuracy in single fire mode (oddly, contrary to the Soviet experience in the 1950s). This flaw was also in the minds of Chinese designers, who specifically designed the Type 81 to be more accurate than the Type 56, utilizing a short-stroke gas piston system as opposed to the long-stroke used in the Type 56. The barrel manufacturing techniques were also improved, and the barrel itself is longer relative to the Type 56 assault rifle.

Charlie Gao studied political and computer science at Grinnell College and is a frequent commentator on defense and national-security issues. (This first appeared several years ago.)