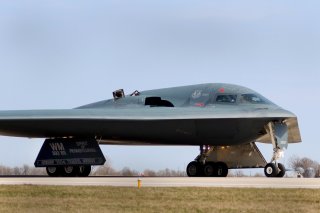 Here's What You Need to Remember: The B-2, while not getting any younger from its 1997 debut, is anything but a slouch in the heavy bomber stealth performance department. It likewise features a remarkable viable avionics package for its day, boasting a coterie of digital displays (including a Synthetic Aperture Radar).

A few years back, the US Air Force posted a two-minute long video of the B-2 dropping GBU-57A/B “bunker buster” bombs from a past training event. The clip, shot with an unusually high video fidelity for a military exercise, shows a B-2 opening its internal weapons bay to drop two GBU-57 massive ordnance penetrator (MOP) bombs. One of the bombs drills into the earth beneath the designated area, marked with a red cone, before detonating in a powerful explosion with good effect on target (GEOT).

Mark Episkopos is a frequent contributor to The National Interest. Mark is also a Ph.D. student in History at American University. This article is being republished due to reader interest.