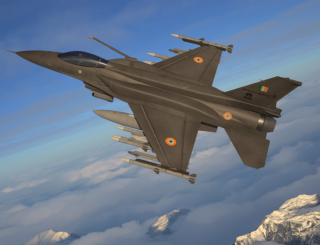 Key Point: This new plane was created specifically to help India modernize its Air Force. But it is still unclear if India will go for it.

Lockheed Martin describes the F-21 as being "specifically configured for the Indian Air Force," and that it provides unmatched "Made in India" opportunities that could strengthen the nation's path to an advanced airpower future. The fighter program is a joint partnership with Lockheed Martin and Tata, and is aimed at addressing the IAF's unique requirements – while still supporting thousands of U.S. supplier jobs, including U.S.-based Lockheed Martin engineering, program management, sustainment and customer support positions.

It includes "innovative technologies" that Lockheed Martin says were derived from its F-22 and F-35 – the world's only two operational fifth-generation fighters.

The fighter was developed to compete in India's 2019 tender for 110 new warplanes, with a contract estimated at more than $15 billion.

It is officially the F-21, but aviation experts note that it is an advanced version of the F-16 "Fighting Falcon" multirole fighter that includes some technologies developed for the F-22 "Raptor" and F-35 "Lighting II" program.

Last September it was announced that the American aerospace giant would begin supplying wings for its F-16 combat jets from a facility located in southern India. Lockheed Martin had also offered to shift the production of the F-16 line from the United States to India.

This was part of Indian Prime Minister Narendra Modi's "Make-in-India" program, whereby global firms—including those in the defense sector—would set up manufacturing centers in India as a way to build a domestic industrial base, as well as to create jobs.

India has the world's largest volunteer military in the world with more than 5.1 million personnel, but the country remains the second-largest arms importer in the world after Saudi Arabia – even as three Indian state-owned companies are among the world's top one hundred arms suppliers. The nation is addressing its failure to build a strong indigenous defense industrial base—and that could include producing the F-21, even if it is really just an improved F-16.

Seven fighters have been vying for contract and this included the F-21 from Lockheed Martin, F-18 and F-15 from Boeing, Gripen from Saab, MiG-35 and Sukhoi-35 from Rosoboronexport and Rafale from Dassault Aviation. And whatever fighter wins – at least 85 percent of the complete fleet of new aircraft will have to be constructed on Indian soil.

"In the competition, there are both single-engine and twin-engine aircraft. We are looking to prepare the qualitative requirement specifications in a way that there is a level-playing field between both the fighters and there can be a fair competition between them," top IAF sources were quoted by Asian News International.

The IAF will shortly decide which plane will best serve its needs to replace its aging fleet of MiG-21 and MiG-27 fighters/strike fighters. After it decides, the decision will then move to the Defence Acquisition Council for the approval of the tender by the Defence Ministry.