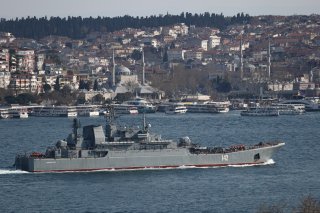 Here's What to Remember: Despite steadily worsening relations between Moscow and Warsaw, authorities and company representatives involved in Ruslana’s detention say the incident is not political.

As military and geopolitical tensions swirl between Moscow and Warsaw, Polish authorities have confirmed the detention of a Russian cargo ship in the Baltic Sea’s Gdańsk Bay.

“Currently, the vessel is lying in the anchorage,” Poland’s Maritime Office in Gdynia confirmed via a press statement on Sunday. “An inspector of the state port inspection of the Maritime Office in Gdynia and officers of the border service inspected the vessel. A note on the ship’s detention was drawn. The police were informed about the incident.” The Maritime Office added that the vessel was apprehended and detained on the night of December 3 after ignoring multiple attempts by Poland’s coast guard to make contact. Polish port authorities noted that the vessel, the 7,750 dwt general cargo ship Ruslana, was traveling straight toward the island of Sobieszewo at a speed of eleven knots per hour and would have run aground if not for a sharp last-minute turn.

Coast guard inspectors allegedly found that three crew members, including the captain, were inebriated at the time of the incident. Alexey Surovtsev, the general director of the Transflot shipping company, confirmed to the Russian news outlet Izvestia that the Russian crew members in question were drunk, adding that the crew will be replaced on Monday by sailors from Russia’s central European enclave of Kaliningrad. However, Surovtsev denied the allegation that the Ruslana had steered off course.

Despite steadily worsening relations between Moscow and Warsaw, authorities and company representatives involved in Ruslana’s detention say the incident is not political. Tensions spiked between the two countries in November after Belarusian president Alexander Lukashenko, seen by his critics as a proxy of the Kremlin, orchestrated a humanitarian crisis along the Polish-Belarusian border. Minsk has funneled thousands of migrants—mainly airliner passengers from the Middle East—to the Polish border where they have been demanding passage to Germany. Poland and the European Union have accused Lukashenko of retaliation for Western sanctions in the aftermath of the 2020 Belarusian presidential election. Poland’s prime minister, Mateusz Morawiecki, has pinned the blame on Russia, claiming that the migrant crisis “has its mastermind in Moscow.” Morawiecki accused Lukashenko and Russian president Vladimir Putin of trying to destabilize the European Union.

Poland’s defense ministry is in an advanced stage of negotiations to purchase as many as 250 M1A2 Abrams SEPv3 tanks, with the first deliveries expected to begin next year. The eastern European country finalized a $4.6 billion contract in 2020 to purchase thirty-two F-35 Lightning II fifth-generation stealth fighters from the United States. The first batch of Polish F-35 jets is slated to be delivered to Luke Air Force Base, Arizona, in 2024, followed by in-country deliveries beginning in 2026.