The M1A2 Abrams Is The Tank Of The Future 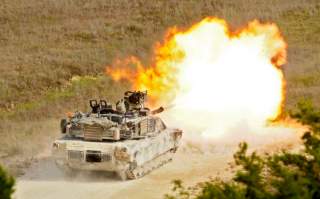 In 2013, a year before Russia seized Crimea and invaded its sovereign neighbor, Ukraine, the United States came within months of shuttering the last plant in the Western Hemisphere capable of building main battle tanks. The Obama Administration, believing that the United States no longer faced the threat of conflict with a major land power, sought to save money by terminating the Abrams upgrade program and closing for four years the factory, called the Joint Systems Manufacturing Center (JSMC), at Lima, Ohio.

Now, great power competition is back and with it the need to deter large-scale conventional aggression in both Europe and Asia. Russia, for example, has been engaged in a decades-long, comprehensive program to modernize its conventional force structure and now poses a threat to NATO. According to the Chief of Staff of the Army, General Mark Milley, U.S. ground forces are threatened by Russian tanks and artillery: “It’s close. It’s not overly dramatic but it’s the combination of systems — we don’t like it, we don’t want it — but yes, we are technically outranged and outgunned.”

Faced with this threat, the Army responded by jump-starting its modernization efforts. It created a series of Cross-Functional Teams (CFTs) to address critical areas for modernization including long-range precision strike, air, and missile defense and networking. One CFT is focused on Next Generation Combat Vehicles. This CFT’s mandate is to manage both near-term upgrade programs such as Mobile Protected Firepower and the Armored Multi-Purpose Vehicle while pursuing longer-term efforts to find replacements for existing armored fighting vehicles. For instance, Army leaders’ highest modernization priority for a Next Generation Combat Vehicle is a replacement for the Bradley Fighting Vehicle.

Fortunately, the Army does not have to develop a new tank. Today’s Abrams is not your father’s main battle tank. Since introduced in 1980, it has undergone a series of upgrades to keep it ahead of competitors. Over the three-plus decades the M1 Abrams has been in service, the Army has upgraded or replaced almost everything on it but the original 1500 horsepower gas turbine engine. As a result, the Abrams remains today the world’s best main battle tank.

More critical because of evolving threats, the Abrams is the tank of the future. Planned upgrades will ensure that the Abrams maintains its dominant position for decades to come. The Army is beginning to receive the latest update, the System Enhancement Package Version 3 (SEPv3). This provides the M1A2 with new computers, sensors, radios, and power management systems. It installs a new Auxiliary Power Unit (APU) that allows the Abrams to keep its sophisticated systems running while the engine is off. Survivability measures include an improved Crew Remotely Operated Weapon Station, a Counter Remote Controlled Improvised Explosive Device Electronic Warfare package and reinforced armor. The SEPv3 also will enhance the Abram’s lethality by adding an improved Ammunition Data Link for the fire control system and new rounds for the 120mm main gun, including one designed to defeat the explosive reactive armor on the latest Russian tanks.

According to Major General David Bassett, former program executive officer for Ground Combat Systems, “The Abrams M1A2 SEPv3 is the first in a series of new or significantly improved vehicles that we will be delivering to the Army’s Armored Brigade Combat Teams. It is a great step forward in reliability, sustainability, protection, and on-board power which positions the Abrams tank and our ABCTs for the future.”

In a separate initiative, the Army is also adding an Active Protection System (APS) to the Abrams. An APS detects, tracks and intercepts rocket-propelled grenades and anti-tank guided missiles. Initially, the Abrams will be equipped with the Israeli-designed Trophy APS.

The Army already has an even more advanced enhancement package for the Abrams in development. It has been reported that the System Enhanced Package Version 4 (SEPv4) will add a new laser rangefinder, an advanced Forward Looking Infrared sight, cameras to provide 360-degree situational awareness, integrated onboard networks, advanced meteorological sensors, better ammunition data links, laser warning receivers and a far more lethal, multi-purpose 120mm tank round.

Beyond these improvements, other innovations could further improve the Abram’s performance and survivability. The overall weight of the platform could be reduced by replacing the existing 120mm gun with a lighter one, rewiring the tank with fiber-optic cables and even adding an automated loader for the main gun which would permit changing out the current turret for a smaller one. Some observers have suggested adding a non-line-of-sight round to the Abrams’ ammunition suite. This would significantly expand the tank’s combat envelope. The Abrams’ gas turbine engine could be replaced with one that uses diesel fuel or even with a hybrid diesel-electric powertrain.

It is clear that there are numerous options available to the Army to enhance the performance of the M1A2 Abrams before there is any need to consider a brand new design for a main battle tank. This essential truth led Colonel Jim Schirmer, Program Manager for the Next Generation Combat Vehicle to conclude: “I believe that a complete replacement of the Abrams would not make sense, unless we had a breakthrough… with much lighter armor which allows us to re-architect the vehicle … Until technology matures we are going to mature the Abrams platform.”

It is vital that the increase in production of the M1A2 Abrams SEPv3 begun in fiscal year 2019 be continued well beyond next year’s defense budget. A robust Abrams modernization program will support national security while simultaneously helping to revitalize manufacturing in the industrial heartland of the Midwest and create thousands of high paying skilled jobs. The Abrams upgrade program will ensure the survival of the last tank plant in America.