The Electronic Warfare Revolution is Changing How the Army Operates 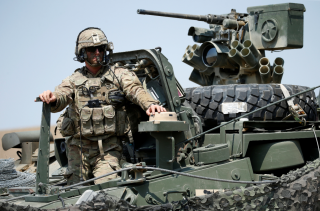 Here's What You Need To Remember: Cyber-electronic warfare synergy is quickly multiplying mission possibilities and changing the tactical landscape.

The U.S. Army is moving quickly to build multi-functional, cyber-enabled electronic warfare (EW) applications into large and small combat platforms, including Stryker vehicles, helicopters, devices for the dismounted soldier and even small drones.

Raytheon’s EWPMT can operate out of a laptop or server stack configuration and the technology is now being finalized as part of a multi-function terrestrial layer for platforms such as Stryker vehicles. It is also built to sustain functionality in a GPS-denied environment and merge with newly emerging technologies designed to solidify Positioning, Navigation and Timing variables. To meet these requirements, EWPMT uses a chat function with technology to geolocate operational positions. The software can be set to provide “automated alerts” for users and also enable what’s called machine-to-machine interface wherein platforms can increasingly network signal-specific data across a dispersed battlefield.

“We need to support the breadth of all the types of EW systems and the types of waveforms they may produce. We offer a software development kit for developmental purposes to adapt to many different sensors. We can also add hardware,” Jeffrey Polhamus, Product Line Lead, Multi-Domain Battle Management, Raytheon Intelligence and Space, told The National Interest in an interview.

For instance, EWPMT is engineered to discern which emissions or frequencies were hostile from within an otherwise crowded electromagnetic field, analyze the multi-frequency signal data against a known database in seconds, and render problem-solving, organized analysis to human decision makers amid fast-changing combat operations.

Threat identification is fundamental to EWPMT functions as it is fundamental to de-conflicting signals, combining a host of variables into an organized database to engender a complete rendering. Along these lines, EWPMT can also help “tailor” signals to identify a linear, more precise emission, less detectable to an enemy. Naturally, the larger the scope or envelope of an electronic signature, the more easily it can be found by an adversary.

“From a joint perspective, you want to understand your communications frequencies. Are you jamming what might be ‘your’ emissions? Can you put it all into one common picture to make sure all the services can play together to produce an outcome?” Polhamus explained.

“Now you have something up in the air and it is giving you more range as well as looking at the realm of the possible,” Edwards said.

Building upon these kinds of applications, the Army is now already experimenting with the possibility of flying autonomous, EW-empowered drones. “It is a goal we are experimenting with, using a modular mission payload,” Edwards added.

Raytheon engineers have been working to anticipate this emerging Army requirement by working to expand the mission applications for EWPMT and EW sensors.

“We have added modeling and simulation to focus on the remote control of EW sensors for dismounted and mounted capabilities,” Polhamus said. Some of these adaptations are woven into Raytheon’s “4th capability drop” technical upgrades now going through operational testing.