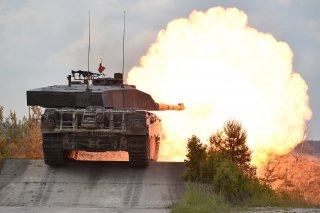 Here's What You Need to Remember: While it is likely that the British Army can get back on track with its tanks, this is certainly a sad state of affairs for the nation that was once the pioneer of armored warfare dating back more than a century.

Great Britain is a land of “old things,” from the castles built in the middle ages to the ruling monarch who is ninety-four-years-old. Britain’s armored force may not be quite as antediluvian as either, but many of the vehicles are still far older than the crews. A March 14 report released by the UK Parliament’s Defence Committee found that the British armored fighting capability to be “deplorable, obsolescent and even outgunned.”

Conservative MP Tobias Ellwood, chairman of the Commons Defence Committee, put the age of the tanks in context, according to The Daily Mail newspaper, “Over the past two decades, the Ministry of Defence has allowed our armoured fighting vehicles’ capability to atrophy at an astounding and alarming rate. Of the vehicles we do still have, some date back to the early 1960s, when the Morris 1100 was the most popular car and Elvis was the Christmas No 1.”

It is true that the United States military operates older aircraft—notably the B-52 Stratofortress bomber—that are even older than when Elvis topped the pop charts in the United Kingdom, but those aircraft have been routinely updated to address modern threats. This hasn’t been the case with the British Army’s aging tanks.

The sixty-page report warned, “Were the British Army to have to fight a peer adversary [a euphemism for Russia] in Eastern Europe in the next few years, whilst our soldiers would undoubtedly remain amongst the finest in the world, they would, disgracefully, be forced to go into battle in a combination of obsolescent or even obsolete armored vehicles, most of them at least 30 years old or more, with poor mechanical reliability, very heavily outgunned by more modern missile and artillery systems and chronically lacking in adequate air defense.”

There are multiple factors at play that have impacted the fighting ability of the British Army’s tank force.

“A mixture of bureaucratic procrastination, military indecision, financial mismanagement and general ineptitude has led to a severe and sustained erosion of our military capabilities,” added Ellwood. “In a conflict, the capable men and women working for the Armed Forces may find themselves outmatched, reliant on a fleet of outdated and outmoded fighting vehicles. These failures may cost lives.”

Despite the fact that the British government has quite literally spent billions of dollars since 1997, the British Army has been equipped with not a single new armored fighting vehicle. The report to parliament called the management of the British Army’s equipment programs “extremely weak.”

While in the 1990 the United Kingdom had a force of around 1,200 main battle tanks in its inventory, today it has just 227 and most of those are in urgent need of modernization. More ominously, the tank fleet will be reduced from the current level to between 150 and 170 tanks.

Forbes’ David Axe suggested that in a hypothetical war with Moscow in Russia, “it’s not clear the Brits with their dwindling stocks of antique vehicles would have much to offer.”

The report also laid out a number or recommendations and requirements, which include an independent scrutiny of the United Kingdom’s armored vehicle programs. While it is likely that the British Army can get back on track with its tanks, this is certainly a sad state of affairs for the nation that was once the pioneer of armored warfare dating back more than a century.