Will the British Army Retire the Tank After 105 Years? 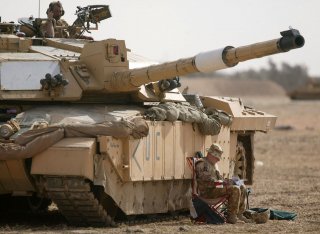 It was 104 years ago this month that the British military first used “tanks” in battle, and that came just a year after Winston Churchill established the Landships Committee, which oversaw the development of the original tanks. The goal of this small committee first was to oversee the development of large wheeled “landships” that were estimated to weigh as much as 300 tons and could roll over any terrain.

The idea proved to be too ambitious and the actual first tank—dubbed “Little Willie” as a joke mocking Germany’s Kaiser Wilhelm II—was far smaller than the massive landships originally envisioned and it was even unarmed. It actually took more than a year for the eventual MkI tanks to be refined. In an effort to hide exactly what the military was building, the vehicles were called “tanks” to suggest a container to transport fresh water to the front. In December 1915, the codeword “tank” was officially adopted, and the Landships Committee officially became the Tank Supply Committee.

When the tanks rolled into action during the Battle of the Somme it was just the beginning of things to come for tanks in combat.

But now after a century the first nation to introduce the tank on the battlefield may be ready to give it up completely. Last year, then-Defence Secretary Penny Mordaunt suggested the tank was obsolete and noted that many of British Army’s Challenger 2 tanks have been in service for more than twenty years without a major upgrade.

As the BBC reported, efforts to reduce the number of British tanks in service have already begun. While the British Army once had more than 500 of the Challenger 2 tanks in service that number has been slashed to around 227, with many of those now in storage. That number could be further reduced to around 148 tanks, which would reduce the British Army to just two tank regiments including the Royal Lancers and Royal Tank Regiment.

Each unit would have around fifty-six tanks while the remainder would be set aside for training and reserve use.

For its part the Army has considered a variety of options, including modernizing the fleet of Challenger 2 tanks with a new turret and gun, while another plan would be to adopt the German Leopard 2—and there would be some irony that 100 plus years after developing the tank to fight Germany, the British Army would eventually adopt Germany’s tank!

This isn’t the only irony for the nation that first developed the tank. Before and during the Second World War, the British military also struggled to produce a tank that was capable of taking on the German panzers, and it was only at the end of the war that the Centurion was developed. It remained the best tank in the early Cold War and it saw use in the Korean War, the Suez Crisis and notably the Six Day War where it was used by Israeli as well as Egyptian and Jordanian forces.

Today the issue isn’t just one of building a better tank—but also the fundamental question of what role the United Kingdom and its military should or could play in the North Atlantic Treaty Organization military alliance.

Even with just two tank regiments, it is worth noting that the Challenger 2 tanks are used alongside twenty-eight-ton Warrior fighter vehicles, which can transport infantry into battle and even engage other light armored vehicles in combat. However, the plan to modernize the British Army’s 700 Warriors has also been met with serious cost overruns and delays.

The United Kingdom would not be the first to abandon the tank. The Dutch Army has retired its tank force, and only retains a few tanks in reserve while some of its soldiers are embedded within the German Army’s armored units.

Earlier this year, the United States Marine Corps also announced it would retire all of its tanks and a third of its tube artillery within ten years as it transforms to a leaner, more amphibious-focused fighting force.

This would also not be the first time that the British military made such a drastic move—only to reverse course later. In 2010 the UK retired its only operational aircraft carrier, but now the Royal Navy has ambitious plans that include two aircraft carrier battlegroups.

Perhaps in the future the British Army will consider the need for a tank, but that will be determined by the ever-changing battlefield.