End of an Era? These Five Weapons Can Kill Aircraft Carriers 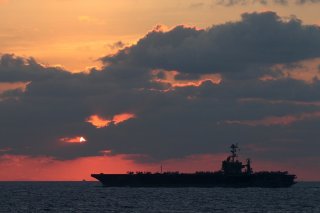 Here's What You Need to Remember: At some point, the game will be up; carriers will no longer pack the offensive punch necessary to justify their vulnerability. It’s not obvious when that day will come, however; we may only find out after the destruction of one of the Navy’s prize possessions.

But what of the future? How will we plan to kill carriers thirty years from now? Here are five problems that the next generation of aircraft-carrier architects will need to worry about.

Submarines have long posed the deadliest threat to aircraft carriers. In World War II, every major carrier fleet suffered losses to submarines; in the Cold War, the U.S. Navy viewed Soviet subs as a critical problem. Against modern antisubmarine warfare capabilities, the biggest difficulties faced by a submarine involve finding a carrier, then getting into firing position (with either missiles or torpedoes) before the carrier’s aircraft and escorts can detect and kill the sub. If the boat’s commander isn’t suicidal, finding a potential avenue for escape is also an issue.

Unmanned submarines solve several of these problems. They can wait indefinitely along the likely avenues of approach, only moving to attack after they detect the carrier. And robot submarines don’t worry too much about how their families will manage once they’re gone. Armed with only a few weapons, undersea unmanned vehicles, operating autonomously under preset conditions, could give future aircraft carriers a very serious headache.

Aircraft carriers already consist of a terrifyingly complex system of systems, from the ship itself to the air group to the escort task force. The Ford-class CVs will expand this even farther, operating as part of a system of weapons and sensors that can span across hundreds, even thousands, of miles. The digital linkages of this network will be well protected, but hardly impermeable; it is likely that any foe will take steps to attempt to disrupt and compromise the computer systems that allow the Fords to have the greatest effect.

The impact of cyberattacks against carriers could vary widely; at a minimum, they could effectively blind the carrier, making it more difficult for the ship and its aircraft to carry out their mission. It could also reveal the carrier’s location, making the ship vulnerable to a variety of attacks, including missiles and submarines. At the extreme, a cyberattack could disable key systems, making it impossible for the ship to defend itself.

In Peter Singer and August Cole’s Ghost Fleet, American UAVs destroy two carriers (the Russian Kuznetsov and the Chinese Shandong) at the end of a carrier battle in the North Pacific. In some sense, of course, drones represent nothing new; on the one hand, cruise missiles are little more than suicidal drones, and on the other hand, planes have been sinking aircraft carriers since the 1940s. But modern, manned aircraft seeking to hit an aircraft carrier face near-insurmountable obstacles; modern air defenses make a conventional approach suicidal. Cruise missiles help extend the range, but face the same problem in penetrating air defenses.

Autonomous UAVs, capable of using both stand-off and close-range weapons, have the flexibility to overwhelm air-defense networks, especially when they don’t need to worry about the survival of their pilots. They can dispatch weapons at various ranges, then close with the target and use themselves to inflict fatal damage on the carrier. There’s nothing in the world more dangerous than a robot with nothing left to lose. . . .

China, Russia and the United States have all devoted extensive attention to hypersonics, which pose a threat in many ways similar to that of ballistic missiles. Unlike ballistic missiles, however, hypersonics can approach a target from a trajectory that makes them extremely difficult to target with defensive weaponry. They combine the most lethal aspects of both ballistic missiles and cruise missiles, and with inertia alone can cause enough damage to a carrier to kill a mission, if not the entire ship. And hypersonics may become more politically palatable than ballistic missiles, largely because of the association of the latter with the delivery of nuclear warheads.

Aircraft carriers are inherently unstealthy; they cannot be made invisible to sensors in the same way that a plane, submarine, or even surface ship can be rendered effectively invisible. However, aircraft carriers have always derived a certain degree of their usefulness from their mobility. The disadvantage of a static airbase is that the enemy always knows where it is; the tactical problem becomes a simple question of offensive versus defensive weapons. Aircraft carriers can use their mobility to take advantage of the difference between seers (surveillance systems) and shooters (stand-off weapon systems).

Orbital bombardment systems (nicknamed “Rods from God”) can solve that problem. Satellites equipped with tungsten rods, or really any other kind of kinetic weapon, can simultaneously identify aircraft carriers and attack them, without messy problems associated with networked communications. The Rods from God, using kinetic energy alone, could deliver a tremendous blow to a surface target, either sinking a carrier or rendering it useless.

Can the Carrier Endure?

Aircraft carriers are instruments of geopolitical influence. As long as they serve usefully in that role, nations will seek means to neutralize them. The aircraft-carrier form has proven remarkably flexibly, serving in one way or another for nearly a hundred years. From the USS Forrestal on, the U.S. Navy supercarrier has existed in basically the same form since the 1950s, and is expected to continue operating into the latter half of the twenty-first century. At some point, the game will be up; carriers will no longer pack the offensive punch necessary to justify their vulnerability. It’s not obvious when that day will come, however; we may only find out after the destruction of one of the Navy’s prize possessions.

Robert Farley, a frequent contributor to TNI, is author of The Battleship Book. This article is being republished due to reader interest.