Eye in the Sky: U.S. Drones Are About to Get a Lot Deadlier 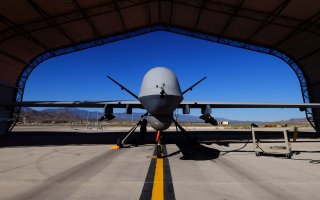 Key Point: The new system will sustain a continuous accurate track on an object or target as it comes in and out of view, massively improving command and control.

What if a U.S. drone was closely tracking an armed enemy vehicle when, suddenly, the target leaves a sensor’s field of view, becoming seemingly un-trackable? Is targeting lost? Are offensive operations compromised?

Not so fast, according to emerging AI-enabled tracking technology now being developed by CACI, a technology firm supporting the U.S. military services. Fast-maturing algorithms are now able to analyze a host of variables at one time, at lightning speed, to discern a target’s trajectory and continue tracking an object even after it has left a sensor’s field of view. Such a technical ability, empowered by automation, machine-learning and AI-empowered algorithms, would assess things like speed, trajectory, nearby terrain and a range of other factors to calculate a way to continue tracking an enemy vehicle. This would naturally introduce a wide range of significant new tactical advantages for surveillance planes, drones and other types of SIGINT-assets.

The new system, which is primarily intended for drones or tactical medium altitude ISR platforms, would enable newer kinds of “persistent tracking,” according to CACI’s manager of AI research and development Brian No.

“This is a capability to automate the process of the video stream and then observe a high level of activity that is going on in the video. We’ve developed full motion video analytic capability up to a certain TRL level and have worked with customers to evaluate the technology in different environments,” No told TNI in an interview.

No explained that the system has not yet been integrated onto an airborne platform but will be soon, once current software development continues to evolve. The system relies in part on modern adaptations of a well-known process now being used for Full Motion Video analysis called Task, Collect, Process, Exploit, Disseminate. Full Motion Video analytics, at times using AI-empowered technologies to quickly discern, analyze, organize and transmit data, exist in a number of places throughout the military. Most of all, such technology enables both efficiency and speed when it comes to warzone decision-making. In terms of its tactical relevance, what this means is that a human operator does not have to pour through hours of video streams to identify key, time-sensitive moments of relevance. It can perform that function in near real-time, massively improving the combat equation.

What CACI’s new system does, which does not yet exist, is sustain a continuous accurate track on an object or target as it comes in and out of view, massively improving command and control. Not only that, but an application of this kind naturally improves targeting as it can better anticipate a location where a target is “going to be” to a much greater extent, in addition to tracking where it is. Machine learning applications can, for instance, take information from an object’s prior movements, integrate them into an existing database and perform analytics to quickly estimate where it is likely to go next. Of course, that is how AI functions: it bounces new data off of an existing database to collect, analyze and then disseminate the most-needed and accurate information possible. In effect, it performs analytics, makes some decisions autonomously, and provides human decision-makers with streamlined, efficient information.