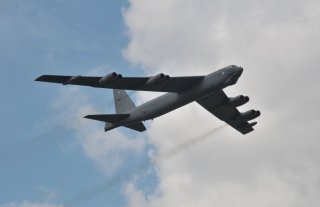 Here's What You Need To Remember: American fighter squadrons could fly into combat with far fewer weapons than their opponents could carry. An arsenal plane, lobbing potentially hundreds of missiles from well behind the aerial front line, could help to close the weapons-gap.

The head of the U.S. Air Force’s Global Strike Command wants to develop a new aircraft type that can function as the command’s “arsenal plane.”

The arsenal plane would carry large numbers of long-range munitions into combat, adding firepower to a main force of fighters.

However, the arsenal plane presumably would not possess the same sensors, performance and stealth qualities that other types possess.

“The arsenal plane concept is probably better described as more of a clean-sheet approach to a platform that can affordably and rapidly fill the gap for long-range strike capabilities, and to go down more innovative paths,” Gen. Timothy Ray told reporters in early April 2020.

This apparently is the first time that a top Air Force officer has insinuated that a new, “clean-sheet” design, rather than an existing type, should fill the arsenal-plane role. The Air Force previously had hinted that the B-1 and B-52 bombers and even airlifters could function as arsenal planes.

“If you look at our force going forward, a lot of the programs that we have are turning the bomber force into something else,” Will Roper, the Air Force’s top weapons-buyer, said at a press event in Washington, D.C. in November 2019. “A B-52 with a lot of hypersonic weapons on it is, I will call it a bomber, but it's certainly not dropping things down—quite the opposite, right? It's almost a missileer instead of a bomber.”

Ray around the same time said that cargo planes could be candidates for the arsenal role. “You have to go look at those options, if you believe you’ll have access to airlift assets to go do that in a time of crisis,” Ray said. “I’m not mentally there, I don’t see how that comes together.”

There’s a cold logic in the Air Force’s drive to acquire an arsenal plane. To preserve their clean, radar-dodging lines, the service’s F-22 and F-35 stealth fighters typically carry their weapons in small internal bays.

The idea is for the fighters to spot targets for the more-vulnerable arsenal planes, allowing the latter to remain farther from the battle. For that reason, an arsenal plane could need sophisticated communications systems, whether it’s a new design or a modification of an existing type.

“This is a little unusual and something (almost) entirely new,” Brian Laslie, author of The Air Force Way of War, told The Daily Beast shortly after the Air Force first announced the arsenal-plane concept. “But with too few fighters carrying too few weapons—and rapidly-arming foes—the Pentagon seems willing to risk something unusual and new.”

David Axe is defense editor at The National Interest. He is the author of the graphic novels War Fix, War Is Boring and Machete Squad. This article first appeared earlier this year.