Fake Missiles To Fool Enemies? The B-52 Bomber Had Them. 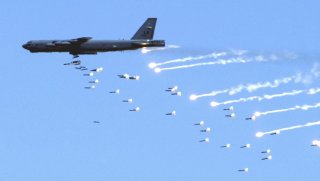 Here's What You Need to Remember: This platform gave the B-52 one interesting way to trick its opponents.

The United States Air Force’s B-52 has been flying high for decades and could continue flying for another decade at least—meaning that future aircrews could be the great-grandchildren of the pilots who first took up the bombers in the 1950s. One factor in the longevity of the B-52 is that the Air Force has steadily upgraded not only the aircraft’s systems and even its engines, but also the weapons platforms that are used with it.

Among those latest upgrades could be hypersonic missiles, true twenty-first-century technology. Yet, among the first upgrades was something that likely seemed almost futuristic when it was introduced in the early 1950s.

That would be the McDonnell ADM-20 Quail—originally designated the GAM-72—an air-launched decoy missile that could be deployed from the bomber. It was designed to produce radar images that would appear very similar to that of the B-52 and it could fly at approximately the same speed and altitude.

The Air Force first discussed the requirement for such a device in October 1952, but it took until 1955 for the program to actually be initiated with a formal requirement released in early 1956. However, the project moved into high gear and McDonnell was selected a month later in February of 1956.

Flight tests of the GAM-72 began in July 1957, while the first glide test was then conducted in November, followed by the first successful powered flight—lasting some fourteen minutes and covering 103 miles—in August 1958. The Air Force seemed impressed and McDonnell gained a production contract in December 1958. That was notable as during the same time period many other projects were canceled or otherwise sidelined.

The GAM-72 was a tailless high-wing delta with four vertical fins and it was designed to fit inside the B-52’s bomb bay, and to accomplish this it was equipped with folding wings/fins, which would be unfolded when it was deployed. It could operate at 35,000 to 50,000 feet and at speeds of Mach .75 to .9 and it had a range of 357 to 445 nautical miles depending on the altitude.

Up to eight could be carried in a B-52, while four could fit in the Air Force’s smaller B-47. Normal loading, however, was four and two respectively.

The Quail was planned to be used during an actual bombing attack to confuse an enemy’s radar network. At the time the Soviet’s had developed a twin-engine Su-15 interceptor, which was designed to shoot down B-52 and keep the bombers from reaching their targets. While the Quail wouldn’t fool an enemy pilot, it was conceivable that the interceptor aircraft would go after the decoy, increasing the likelihood that the B-52 could reach its target.

It could be programmed on the ground before a flight to make at least two changes in direction and one in speed during its 46 to 55 minute flight.

The Strategic Air Command (SAC) received the first GAM-72 in 1960, and within a year there was one Quail-equipped B-52 squadron in operation. At its peak SAC had 492 Quails in service, but the system proved far from reliable while improvements in enemy radar rendered the decoys less effective. By 1972 radar controllers were able to identify the Quail twenty-one out of twenty-three times.

While never used in combat, the Quail was one of the many platforms that has come and gone with the B-52.