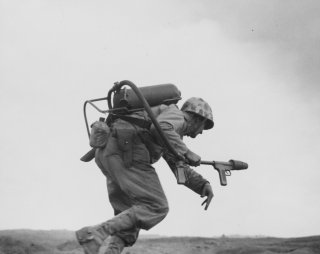 Here's What You Need to Remember: After the total wars of the 20th century, flame devices began to disappear from the battlefield.

Really, The Flamethrower is a masterpiece of the military reference genre.

Through much bloody trial and error, armies refined their uses of flame weapons. They learned to use highly viscous fuel mix in order to project a more concentrated stream of flames over greater distance — and to avoid the awful fate that befell one French fire regiment in June 1916. A sudden wind pushed the French fire barrage back onto the operators, killing at least 25 men.