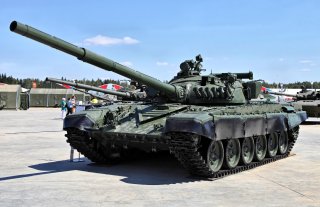 Here's What You Need to Remember: The T-72B entered service in 1985 and incorporated many features from the new T-80, including a laser rangefinder and thicker armor. Now with the T-72B3M the tank that entered service when Richard Nixon was in the White House and Leonid Brezhnev was in the Kremlin is ready for twenty-first-century challenges.

Tass reported this month that the latest batch of upgraded T-72B3 MBTs have been deployed to Russian troops.

The T-72B entered service in 1985 and incorporated many features from the new T-80, including a laser rangefinder and thicker armor. Now with the T-72B3M the tank that entered service when Richard Nixon was in the White House and Leonid Brezhnev was in the Kremlin is ready for twenty-first-century challenges.