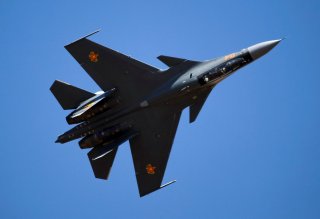 Here's What You Need to Know: The Su-30 quickly rose to global prominence as one of Russia’s most widely exported fighters, appealing to a wide range of clients with its versatility and impressive customizability.

The Kazakh Air Force is set to receive a fresh shipment of modernized Russian fighters, as the Central Asian state prepares for the new wave of regional turmoil emanating from the Afghan border.

"Work continues to implement a contract on the delivery of another batch of four such fighters to our Kazakh partners by the end of 2022. So far, twenty advanced Su-30SM fighters have been delivered to the Republic of Kazakhstan," said Director of Russia’s Federal Service for Military-Technical Cooperation Dmitry Shugayev on Wednesday.

The Kazakh Air Defense Forces (KADF) ordered and received twenty-four Su-30SM “Flanker-H” fighters from 2015 to 2018, with an additional batch procured in 2020. "The Su-30SM aircraft will significantly increase the capabilities of covering troops and objects from air attacks, as well as detecting and destroying air and ground targets,” said Air Defense Forces Commander-in-Chief Nurlan Ormanbetov.

Janes reported that these four additional units will complete the KADF’s second squadron of twelve Su-30SM fighters. Janes further posited that the Kazakh military plans to acquire a total of thirty-six Su-30SM fighters, though the KADF’s timeline for procuring a prospective third Su-30SM squadron has not yet been revealed.

The Su-30SM is Kazakhstan’s most potent fighter jet, joining a fleet of older Soviet-era fighters that include just over two dozen MiG-29s, twenty MiG-31s, and thirteen Su-24s. Kazakhstan operates the most advanced air force in Central Asia, oriented toward low-intensity ground-attack missions against such non-state regional actors as militants, terrorists, and other insurgent groups.

The KADF’s purchase of additional Su-30SM’s comes at a time when Central Asian capitals are signaling alarm over the potential regional fallout from the Taliban’s swift and overwhelming victory in Afghanistan following the U.S. withdrawal ordered by the Biden administration earlier in August. Kazakhstan—a member of the Russia-led Collective Security Treaty Organization (CSTO)— has stepped up its efforts to join Russia, neighboring Central Asian states, and other regional actors in joint drills and other common measures aimed at securing Afghanistan’s borders against militant outflows.

The Su-30SM is a twin-engine, two-seat supermaneuverable fighter that has its roots in a late Soviet project to develop a modernized Su-27 variant. Boasting twelve hardpoints with a combined payload capacity of up to 8,000 kg, the fighter supports a remarkably large suite of air-to-air and air-to-surface missiles, guided bombs from the KAB series, and rockets from the S-series. Not unlike its U.S. F-15E Strike Eagle counterpart, the Su-30SM is capable of performing both air-to-air and precision strike roles. The Su-30SM saw widespread action during Russia’s intervention into the Syrian Civil War, where they were reportedly used for escort and ground attack missions.

The Su-30 quickly rose to global prominence as one of Russia’s most widely exported fighters, appealing to a wide range of clients with its versatility and impressive customizability. The fighter spawned numerous country-specific variants, though Kazakhstan’s Su-30SM is the same modernized version of the fighter that continues to be widely used across Russia’s own Armed Forces.