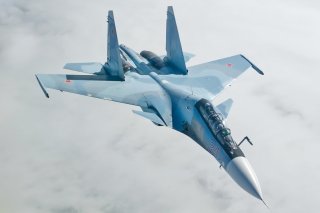 Here's What You Need to Remember: In the early 2010s, many of the Su-30’s export variant improvements were rolled into a single, modernized aircraft built for the Russian air force: the Su-30SM, a 4+ generation fighter that notably added jamming pods and a revamped communications system. With over 100 units spread across its air force and naval aviation branches, the Su-30SM is among Russia’s most prolific modernized fighters.

Emerging as little more than yet another Su-27 variant, the Su-30 multirole aircraft surmounted its unremarkable origins to become one of Russia’s most prolific and widely exported fighters.

One of the most capable Soviet fighters of the late Cold War, the Su-27 was a showcase of best-in-class Soviet technologies meant to defend Soviet airspace against NATO bombers and air superiority fighters alike. But Soviet airspace is inconveniently vast, and, with the Cold War competition raging across distant fronts from central Europe to Russia’s far east, the Kremlin expressed its interest in acquiring a longer-range Su-27 for specific interception scenarios. What would eventually become the Su-30 grew out of several older Su-27 models-- in particular, the modernized Su-27M line. The Su-30 derives much of its airframe DNA from the Su-27UB, a two-seat trainer model; the Su-27UB later became the basis of the Su-27PU long-range interceptor. Following the Soviet collapse, the Su-27PU was renamed the Su-30 and rebranded away from a pure interceptor into a more versatile multirole concept.

The baseline Su-30 model entered service in the mid 1990’s as a double-seat, all-weather supermaneuverable fighter, designed for both interception as well as strike missions. The Su-30 shares broad design similarities with its Su-27 sibling, sporting swept-back wings, an angled nose, and a bubble canopy. The fighter is powered by two AL-31FL engines capable of sustaining a top flight speed of Mach 2-- by comparison, most serially produced Su-27 models are generally capable of reaching speeds of roughly 2.35 mach. The baseline Su-30 configuration boasts the standard late Soviet aerial armament suite, including R-73 short range air-to-air missiles and an expansive selection of Soviet KAB guided bombs.

Beyond these basic details, it’s difficult to generalize about the Su-30. Intended primarily as an export product, the Su-30 spawned numerous variants tailored to the needs of specific foreign customers. The Su-30MKI Indian export version, jointly produced by Sukhoi and Indian manufacturer Hindustan Aeronautics Limited (HAL), notably featured thrust vectoring. The Su-30MKM, designed for the Royal Malaysian Air force, built on the thrust vectoring of the Indian variant with numerous avionics upgrades that included the Soviet “Bars” radar system. Perhaps the most unique Su-30 variant, the Chinese-ordered Su-30MKK was a heavily armed strike fighter that spawned derivatives of its own, later purchased by Vietnam and Venezuela.

In the early 2010s, many of the Su-30’s export variant improvements were rolled into a single, modernized aircraft built for the Russian air force: the Su-30SM, a 4+ generation fighter that notably added jamming pods and a revamped communications system. With over 100 units spread across its air force and naval aviation branches, the Su-30SM is among Russia’s most prolific modernized fighters.

Russia’s aircraft industry is currently working on a Su-30SM2 successor to the Su-30SM. The Su-30SM2 will run on the AL-41F-1S engine of the Su-35. As test pilot Colonel Igor Malikov explained to Russian news outlet Izvestia, this engine upgrade will likely prove to be a major performance boon:  "The more powerful engine of Su-35 will provide higher thrust. It means a bigger number of munitions and equipment on board. The thrust-vectoring module promotes maneuverable combat which also needs proper electronic equipment and weapons controls."

Mark Episkopos is the new national security reporter for the National Interest. This article first appeared two months ago and is being republished due to reader interest.