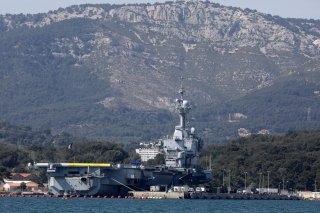 Here's What You Need To Remember: The Charles de Gaulle is the only nuclear-powered carrier outside the United States - but it's approaching the age of twenty, and is no longer as cutting-edge as it was. The new carrier is scheduled to come out in 2038.

It won’t be taking to the seas for nearly twenty years, but the future flagship of the French Navy was officially given the green-light this month. French President Emmanuel Macron announced the construction of a new nuclear-powered aircraft carrier as part of the PANG program to replace the national fleet’s current flagship Charles de Gaulle.

This new yet-to-be-named warship will be the 11th aircraft carrier operated by the French Navy. It will be built by the French defense contractor Naval Group and will reportedly be equipped with the new electromagnetic aircraft launch system developed by the American-based General Atomics.

For months the future of the French program remained largely a mystery, with much speculation but few actual details being released. Now key details of the PANG program’s future carrier have been provided.

According to reports from the Reuters News Agency, the carrier will be 300 meters (984 feet) in length, and it will displace 75,000 tonnes (82,673 tons). This would make it bigger than the second aircraft carrier that Naval Group began work on in the early 2000s until the program was shuttered due to a lack of money, and larger than the Charles de Gaulle, which is 856 feet long and displaces 42,000 tonnes (46,297 tons). The new vessel will have a crew of around 2,000, including its air group.

As noted, it will have electromagnetic catapults to launch aircraft. The carrier’s air wing will include up to thirty-two Rafale fighter jets or successor Dassault fighter that is currently under development as part of a joint effort between France, Germany and Spain. Additional aircraft could include two to three E-2D Advanced Hawkeyes and a yet-to-be-determined number of unmanned carrier air vehicles.

While the French military had initially sought to develop the warship with conventional propulsion, Macron has been a leading-advocate for nuclear-power. The new French carrier will thus have two K22 power generators, which can each produce 220 megawatts. Those generators are derived from the K15 systems, which produce 150 MW each, that are currently employed on Charles de Gaulle.

The option to go nuclear will result in higher construction cost, but the French president has stood by the move.

“Our strategic future, our status as a great power, lies with nuclear industry,” Macron said during a visit to a nuclear sector components maker Reuters reported.

The first steel cut is now set for 2025 and construction will follow, with sea trials slated to begin in 2026 while the vessel will be commissioned with the French Navy in 2038.

France will invest up to a billion euros during the first development phase, which will end in 2026 according to the French Ministry of Armed Forces. The total cost of the carrier could be as much as $6 billion but French officials have declined to confirm the cost estimates.

“Naval Group is very proud to build the largest warship ever built in France,” the company CEO, Pierre Eric Pommelet, said in a statement.

Charles de Gaulle is currently the only nuclear-powered carrier completed outside of the United States.

Named after French statesman and Gen. Charles de Gaulle, the warship entered service in 2001. As of May of last year, it is also the only non-American carrier to have a catapult launch system, which has allowed it operate F/A-18E/F Super Hornets and C-2 Greyhounds of the U.S. Navy.

In April, the French carrier was taken out of service after members of the crew tested positive for the coronavirus.