The Future of the British Royal Air Force Is Here 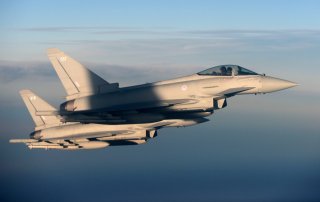 Here's What You Need to Remember: Wigston demurred when asked about the UK’s F-35 procurement plans, reaffirming that London is “committing to growing the fleet” but refusing to either endorse the old acquisition target of 138 F-35 fighters or to offer a revised figure. “This is still a force that we’re growing,” he said.

Air Chief Marshal Mike Wigston, the head of the Royal Air Force (RAF), has shed light on the RAF’s long-term procurement strategy in a comprehensive and revealing interview with Defense News.

The discussion centered around the UK’s Integrated Review of Security, Defence, Development and Foreign Policy document, published on March 16. The Integrated Review placed a heavy emphasis on the importance of divestment, or the practice of replacing legacy equipment with a smaller, but more advanced modernized force. Divestment has become a common procurement trend across service branches from Russia to the United States, with militaries around the world racing to capture the benefits of rapid technological advancement.

Wigston reaffirmed that the RAF will follow suit, but added that there is more to the old “capability vs. capacity” debate than meets the eye. “We all recognize over the last two, three decades, perhaps longer, [that militaries] have had to make that trade-off between mass and technology, because technology came at a high price, and that technological sophistication cost significantly more than the simpler platforms that were being replaced,” he said.  “But I think we’re at a turning point now, and I think we’re at a point where we can look to technology to bring us mass. We can have mass and technology and technological sophistication. And it’s that technology that enables us to have that mass.”

Wigston offered the analogy that, in the future, one hundred swarming drones, ten loyal wingman drones, and two motherships can have the battlefield impact of an “eight-ship of Typhoon [fighters] or eight-ship of F 15s.” The presumed trade-off between capability and capacity is a false dichotomy that takes a shortsighted view of where military technology is headed in the coming years and decades, according to Wigston.

In keeping with his focus on future-oriented platforms, Wigston lauded the government’s decision to retire the decades-old E-3D sentry aircraft in favor of the newer and more capable E-7 Wedgetail. “the E-7 offers that generational leap in technology and digital technology in terms of the sensors, in terms of how it moves data and information around to other platforms, other aircraft, other users in the battlespace, and its ability to reshape the terms of what airborne warning, as well as command and control, actually means,” he said. The Integrated Review cut the UK’s E-7 acquisition target from five to three, a decision that Wigston says can be mitigated in the short term through joint operations with NATO’s Airborne Early Warning and Control Force.

Wigston demurred when asked about the UK’s F-35 procurement plans, reaffirming that London is “committing to growing the fleet” but refusing to either endorse the old acquisition target of 138 F-35 fighters or to offer a revised figure. “This is still a force that we’re growing,” he said. “And we are going to be operating these platforms for potentially fifty years. So I’m not in any hurry to get to any final figure in the short term. And we will just make sure that we’ve got a force that is sustainable through the life of HMS Queen Elizabeth and HMS Prince of Wales.” Wigston added that, though the UK currently possesses only the F-35B short take-off/vertical landing (STOVL) variant, the government is open to considering the F-35A conventional take-off fighter after it acquires a sufficient number of F-35B jets to operate from its two carriers.

Experts have argued that the UK's hesitance to recommit to its original target of 138 F-35 jets can be explained by its decision to pour more resources into its home-grown next-generation Tempest fighter, but Wigston denies that there is a “trade-off” involved in London's procurement thinking: “I don’t see it as [requiring] trade-offs in those terms because the additional money that the government decided to invest in the U.K. armed forces over the next four years, which equates to $33 billion—the Future Combat Air System and space were all part of that, and our ambition to do more around space and with our allies, like the United States in space.”