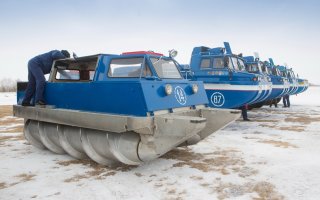 Here's What You Need to Know: The vehicle had an interesting screw-drive design.

While most tanks are tracked, this particular off-road vehicle doesn’t even have wheels. Instead, it uses a pair of screws to move across land—and water. The ZIL-4906 was built sometime in the 1970s and mated a van cabin and chassis with the odd-looking screw drives. The screws are hollow, which allow the ZIL-2906 and its derivatives to traverse water and seamlessly transition from open water to shore.

The design excels offload, and this neat video of a propeller drive is worth the watch. Terrain such as sand, dirt, and especially mucky swampland and soft or hard-packed snow allow the screw drive to glide almost weightlessly across these outdoor surfaces. One of the few places screw drives don’t offer good performance is on-road.

On-road performance was perhaps one of the only drawbacks the design faced. Both noise and speed were issues. On concrete or tarmac, the metallic screws would clatter quite loudly. In a combat scenario this would be akin to simply announcing to the enemy that troops had arrived. Road damage was also an issue, as the screws threads could dig into road surfaces and rip roads apart.

In addition to the excessive noise, the design just couldn’t preform on-road. It struggled to keep up with other tracked or wheeled vehicles that excelled in on-road conditions, limiting its usefulness to suburban operations.

Perhaps the design’s most notable application was in Russia’s cold and icy northern areas. A lack of roads combined with deep snow, sub-zero temperatures, and icy conditions precludes most vehicles from accessing much of Siberia. However it was here that the Soviet Soyuz manned spaceflight capsules would land after reentering the Earth’s atmosphere.

In this capacity, the ZIL-2906 was packed onto the back of a six-wheeled carrier that would being the screw-driven vehicle as far north and as close to the Soyuz capsule as possible, before it could no longer traverse the tough terrain. Once the mothership carrier could no longer go on, the ZIL-2906 would be dropped off and plow away through the snow and ice en route to the Soyuz capsule and the Soviet cosmonauts.

A team of Russian engineers brought the screw-drive design back to life. Though video of the retro contraption demonstrates its off-road capabilities, it is unclear if there is a market for the design. Still, as the globe heats up and Russia’s once frozen Siberia begins to thaw, the design might be uniquely placed to take on swampy, mucky terrain once again.