Explainer: Why Earth’s Magnetic North Pole Is Moving Towards Siberia 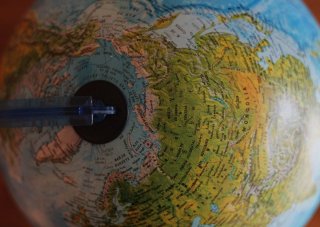 In recent years, it has been a well-known fact that Earth’s magnetic North Pole has been barreling toward Russia. But scientists were stumped in giving a reasonable explanation as to why this was occurring.

It seems as though the riddle finally has been cracked. In a recent study published in the journal Nature Geoscience, a team of researchers has proposed a cause for the shift—two colossal blobs of “negative magnetic flux” sitting beneath Canada and Siberia, located on the edge of our planet’s core.

Earth’s magnetic field is governed by the flow of materials in the planet’s core, and it appears that the two “blobs” are pulling at the magnetic North Pole, whose position was first recorded in 1831.

Over the next several decades, however, its position began to change. Scientists eventually discovered that the magnetic North Pole was moving at a rate of around six miles annually.

Then in the 1990s and 2000s, the pole’s shift suddenly accelerated, eventually reaching a rate of around 25 miles per year.

The research team settled on its conclusions by modeling the movement of molten material inside Earth, using data from European satellites that measure the planet’s magnetic field.

“This change in the pattern of flow has weakened the patch under Canada and ever so slightly increased the strength of the patch under Siberia,” the study’s lead author Dr. Philip Livermore, of the School of Earth and Environment at the University of Leeds, told BBC News.

“This is why the North Pole has left its historic position over the Canadian Arctic and crossed over the International Date Line. Northern Russia is winning the tug of war, if you like.”

The team’s latest modeling indicates that the pole will continue to move toward Russia over the next decade, but will eventually slow down. All told, it could travel another 240 to 410 miles.

“Whether or not it will move back again in the future is anyone’s guess,” Livermore said.

The magnetic pole’s drastic movement has forced updates to the World Magnetic Model. The military relies on this model for undersea and aircraft navigation and parachute deployment, while NASA, FAA and other organizations use it for mapping, satellite tracking and air-traffic management.