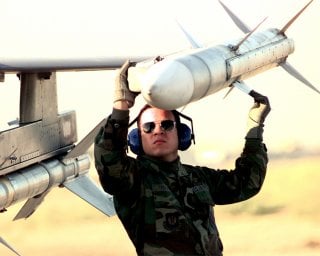 Here's What You Need To Remember: Active radar homing missiles solve almost all these issues. The aircraft can be free to maneuver after launching a missile at enemy aircraft, as the missile will fly until it goes “pitbull,” activating its seeker and homing in on the aircraft by itself. Missiles can also be fired in “maddog” mode, with the seeker locking onto the first radar contact it reaches. These tactics can allow for fighters to “shoot and shoot” effectively, allowing a fast enough aircraft to avoid an engagement entirely after launching its missiles.

Charlie Gao studied political and computer science at Grinnell College and is a frequent commentator on defense and national-security issues. This first appeared two years ago.