Get Ready, China: Taiwan is Building Its Very Own Attack Submarines 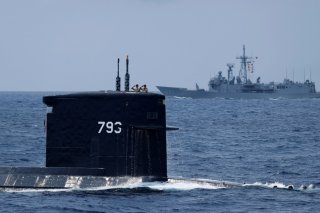 Here's What You Need to Remember: The issue of U.S. technological help seems quite significant, as while the new submarines are not likely to fully mirror the U.S. Virginia-class attack boats, Taiwan could benefit substantially from U.S. technological sophistication when it comes to attack submarine technologies.

With U.S. help, Taiwan is building its own new, indigenous fleet of attack submarines to protect waters off its shores and better safeguard maritime passageways between the island and mainland China, a move which is being criticized, downplayed and dismissed by Chinese military analysts.

Following a celebration at one of Taiwan’s Southern ports commemorating the start of construction of Taiwanese “domestically developed” submarines, Chinese military analysts were quoted in a Chinese government-backed newspaper saying “the Taiwan island does not have what it takes to build advanced submarines, and even with U.S. help, the underwater vehicles could not make waves in the Taiwan Straits, and may suffer from technical difficulties that hinder combat capabilities.”

These remarks stand in stark contrast to comments from a Taiwanese leader cited in the paper saying the emerging submarines will help prevent hostile ships from “encircling Taiwan.” The Chinese experts quoted also questioned Taiwan’s industrial capacity to build the submarines, even though the island of Taiwan has long been known for having a range of production facilities as well as the technical knowledge to move forward.

A Chinese military analyst was quoted in the paper saying “…with the help of the US, which could involve technology transfer, the island could eventually make the submarines work, but due to the inexperience of the island’s industry and the complexity of submarine development, the submarines could suffer technical difficulties that hinder their combat capabilities.”

For example, new Taiwanese submarines could incorporate some of the quieting technologies now being built into Virginia-class boats, many of which were first prototyped years ago on the USS South Dakota, a now deployed Virginia-class submarine which began as a prototype test bed for a new generation of undersea technologies. While details related to many of these systems were naturally not available for security reasons, Navy leaders did explain that they included newer coating materials to lower a submarine’s acoustic signature and reduce the possibility of being detected by enemy sonar. The innovations also include newer kinds of propulsion technologies and command and control systems engineered to give modern U.S. attack submarines at technological edge over adversaries when it comes to reconnaissance, quiet coastal patrols or even surveil high-risk areas.

Taiwanese submarines could also benefit from U.S. innovations in the realm of firepower, as the U.S. Navy’s emerging Block V submarines are built with new, extended Virginia Payload Modules. Those modules are new 80-foot long sections of the submarines adding Tomahawk missiles to the boat’s overall firepower. Adding the modules brings the total number of Tomahawks on board a block V Virginia boat from twelve up to twenty-eight, a massive increase in firepower.

Moving beyond firepower, the greatest technological advantage Taiwan might gain from U.S. assistance might be found in the realm of command and control, given that the Virginia-class submarines operate with a modern Large Aperture Bow sonar array bringing greater range, signal fidelity and sensitivity to submarine sonar detection. This, coupled with computer enabled, fly-by-wire navigational and sensor controls, could give the new Taiwanese submarines an edge when it comes to conducting clandestine reconnaissance missions off the coast of contested areas in the South China Sea or near mainland China.

None of this is to say that new Taiwanese submarines will incorporate all of these systems, as much of that likely remains to be seen, but rather to point out that, with U.S. input, new Taiwanese subs may have a range of advanced and highly impactful technologies to evaluate.