Groundbreaking or Status Quo: The F-15EX Is Puzzling 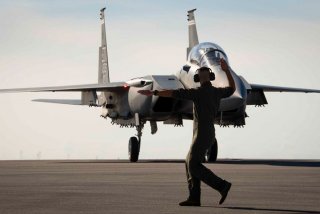 Here's What You Need to Know: Essentially, the F-15EX concept binds generations of technological innovation into the very old F-15 airframe.

As was widely reported in July 2020, the Air Force has decided to acquire a large number of F-15EX fighters over the next several years. The F-15EX was initially expected to replace the elderly F-15 C/D, but the latest reports indicate that it may also replace the Air Force’s fleet of F-15Es.

Essentially, the F-15EX concept binds generations of technological innovation into the very old F-15 airframe. The F-15EX uses the classic F-15 frame but incorporates a host of technological improvements developed over the course of the last thirty years.

Serial production of the F-15, driven largely by foreign sales in recent years, enables the integration of new technologies and keeps both the workforce and the manufacturing facilities fresh. The logic of replacing the F-15E (alongside the F-15C/D) is straightforward:

- the F-15 and the F-35 have overlapping, non-identical missions and capabilities;

At the very least, the F-15EX project means that the Air Force will have new, advanced airframes capable of doing the jobs that F-15s have been doing for decades.

More interesting, however, is the idea that the F-15EX may offer a pathway into the Digital Century Series (DCS). To review, the Century Series concept (associated most notably with Air Force chief of acquisition Wil Roper) involves designing and building an evolutionary set of airframes in small batches with open-source architecture. Roper has embraced the “Century Series” metaphor, notwithstanding the lack of success of the first “Century Series” which produced a set of mediocre aircraft soon eclipsed by the F-4 Phantom II, and critiques that the focus on manned aircraft is misplaced, and that the attention given to the DCS would be more profitably spent on unmanned aerial vehicles.

In the DCS concept, digital engineering technologies would allow the separation of production and design, while the use of 3D printing and other advanced manufacturing technologies would remedy some of the problems associated with the multiplication of spares and maintenance procedures. More importantly, the system would enable to continuous integration of new technologies into new airframes, as opposed to the much slower process necessitated by the precise requirements of stealth airframes. Thus, the “Digital Century Series” represents an entirely new way of thinking about aircraft acquisition, and indeed could lead to a substantial restructuring of the US aerospace industry.

It’s wrong to say that the F-15EX is the first stage of the DCS. Stephen Trimble argues that while the F-15EX program uses many of the same tools that the Digital Century Series envisions, including advanced computer modeling and a modular platform, it is not part of the DCS per se. Trimble also discusses some differences in the handling of intellectual property between the two systems, as Boeing retains substantial rights over the F-15EX while the DCS system envisions full ownership of the relevant IP by the Air Force.

But this does not mean that the F-15EX experience will not serve as a useful test for the DCS process. Boeing has noted that the F-15EX will include a set of design features that will enable rapid upgrades, and also access to the Air Force’s new battle management system, a key part of DCS thinking. Roper himself has touted the connections between the F-15EX and the DCS, notwithstanding the evident architectural gaps.

Not least important, the F-15EX ensures that Boeing will remain a player in the fighter business.  Part of Roper’s objective in pursuing the DCS has been to limit and possibly reverse the industry consolidation that occurred in the military aerospace sector from the 1990s on. Some DCS advocates have even suggested the nationalization of certain aspects of the military aerospace industry, which would resemble in some ways the Soviet system of separate state-owned design bureaus and production facilities. This seems perhaps a step too far, given the history of the US defense industrial base and existing U.S. political realities. But the ability of Boeing to use digital tools to design and produce the F-15EX necessarily makes it a player in the next stage of the Air Force’s project development.

The F-15EX is hardly an inexpensive aircraft, with the cost of new models exceeds that of the F-35A. From the basis of a very old airplane, however, it offers the potential for a new way of thinking about how the Air Force will manage the age-old problem of balancing the existing fleet needs against the relentless advance of technology. If the F-15EX program leads to important lessons learned that enables the DCS, it resolves the problem of putting all of the Air Force’s eggs into a single high-technology basket, such as the F-22 or F-35. But the practical application of this theory of design remains untested, and it cannot be denied that building legacy fighters during a period of resurgent great power competition opens up many questions about the ability of the US aerospace industry to offer long-term defense solutions.

Dr. Robert Farley has taught security and diplomacy courses at the Patterson School since 2005.  He received his BS from the University of Oregon in 1997, and his Ph.D. from the University of Washington in 2004. Dr. Farley is the author of Grounded: The Case for Abolishing the United States Air Force (University Press of Kentucky, 2014), the Battleship Book (Wildside, 2016), and Patents for Power: Intellectual Property Law and the Diffusion of Military Technology (University of Chicago, 2020). He has contributed extensively to a number of journals and magazines, including the National Interest, the Diplomat: APAC, World Politics Review, and the American Prospect. Dr. Farley is also a founder and senior editor of Lawyers, Guns and Money.