The Gun of the Future: Meet the Sig Sauer MG 338 Heavy Machine Gun 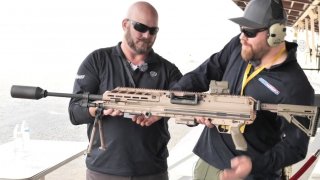 Here's What You Need to Remember: It is possible that despite Sig Sauer’s marketing blitz which shows the MG 338 in the hands of individual soldiers, it may in fact be simply meant as a replacement for mounted weapons instead.

In a press release on the Sig Sauer website, Sig announced that its MG 338 machine gun completed a safety certification in tandem with United States Special Operations Command (USSOCOM), and completed delivery of ammunition, suppressors, and MG 338 machine guns for trials.

The MG 338 represents Sig’s attempt to bridge the gap between the crew-served M2 Browning heavy machine gun, chambered in .50 BMG, and the M240 family of medium machine guns, chambered in 7.62x51 NATO. The goal of the design is to put the range and stopping power of the M2 Browning heavy machine gun into the hands of an individual soldier, which would significantly extend the effective range of an infantry squad in theory.

According to the Sig Sauer press release, the MG 338 is a “belt-fed, lightweight medium machine gun weighing under 20lbs., chambered in 338 Norma Mag. The MG 338 features a short-stroke gas piston system and a proprietary recoil mitigation system, with a free-floating, quick-change barrel, ambidextrous controls, switchable feed tray, charging handle that can be alternated to either side depending on operator preference,” and is apparently easily convertible to the well-known and easily-obtainable 7.62x51 NATO round.

With the MG 338, Sig is attempting to put the range of the .50 BMG into the hands of grunts by using the lighter, but similar .338 Norma Magnum round. While the venerable .50 caliber M2 Browning heavy machine gun can hit targets out to 1,800 meters (2,000 yards) away, it’s heavy. The M2 itself tips the scales at almost 84 pounds— and up to 128 pounds with a tripod!

The high weight of the M2 means it is crew-served. Rather than one soldier or Marine manning the M2, more manpower is needed. The M2 is therefore often mounted on tanks, trucks, boats, or other vehicles.

Sig Sauer was able to reduce the weight of the MG 338 substantially, down to about 20 pounds. The collapsible buttstock is a feature designed to reduce weight and aid portability and maneuverability in confined spaces.

This is lighter than the M240L, the lightest version of the US military’s M240 family of medium machine guns. Depending on the variant, the M240 family weigh just over 22 pounds, up to nearly 28 pounds.

While relatively light, the M20L is at the upper limit of what is considered man-portable when factoring in ammunition, bipod, sights, and other accessories. Additionally, the M240 family is chambered in the 7.62x51 NATO round, which has roughly half the range of the .338 Norma Magnum.

The .338 Norma Magnum round is quite new by ammunition standards. It was developed in 2008-2009 in Sweden and the United States as a more compact, long-range sporting cartridge, for applications where the longer .338 Lapua Magnum cartage would be unsuitable. A machine gun chambered in .338 Norma Magnum would be a radical departure for a round that has been primarily been used as a long-distance precision sniper round.

Building a machine gun platform around the .338 Norma Magnum round is intended to increase the effective range of infantryman from around 800-1,100 meters (875-1,200 yards) with the M240, to reportedly around about 1,700-1,800 meters, and perhaps as far as 1,900-2,000 meters, effectively increasing range by more than double, even while managing to slightly reduce weight.

The MG 338 appears to use a recoil-mitigating system in which the barrel shifts backwards into the rifle platform, similar to the long recoil mitigation on the M2 platform. The moderate rate of fire, at approximately 650 rounds per minute, would theoretically reduce recoil and muzzle climb as well, in order to increase shots on target.

Still, an Instagram video of the MG 338 at the 2020 SHOT Show is revealing. There was a prodigious amount of recoil, despite the mitigation mechanism.

It is possible that despite Sig Sauer’s marketing blitz which shows the MG 338 in the hands of individual soldiers, it may in fact be simply meant as a replacement for mounted weapons instead.

Perhaps it is time for an upgrade. The M2 has been in service for nearly 100 years. The M240 family, nearly 50. Both platforms have proven their worth. Still, questions remain.

Dr. Allan Orr, a counterterrorism and insurgency specialist, outlined the potential problem with using larger-caliber ammunition. “Weapons such as Sig Sauer’s MG 338 might be lighter than the weapon it’s supposed to be replacing, but this does not change the fact that the bullets themselves are roughly twice as large.”

With ammunition nearly double the volume and weight of the 7.62x51 NATO it is designed to replace, individual MG 338 operators will simply not be able to carry as many rounds. “Transitioning from a 7.62 to .338 platform will halve the available rounds for simple lack of storage space— they can only carry so many bullets,” Dr. Orr explained.

As the United States military transitions from years of counter-insurgency preparedness to a focus on near-peer rivals, the rather large and admittedly powerful MG 338 may be out of place.

Dr. Orr described why the extending grunt’s range might be a well-intentioned, but misplaced goal. “The MG 338 is massively overpowered for the urban or village warfare inherent to counter-insurgency scenarios.”

Firefights with an enemy across wide valleys on an adjacent hill in Afghanistan for example, is a markedly different situation than fighting in close-quarters, house-to-house, urban warfare scenarios. Overpenetration of walls and buildings could lead to civilian casualties, or other collateral damage, which multiplies when using a platform designed for targets 1.5+ kilometers (around a mile) away.

The .338 Norma Magnum is certainly a powerful round. Combined with the light and relatively maneuverable MG 338 platform, the range of a Marine or Army infantry squad would definitely be extended. Still, it may not be what’s needed in future warfighting scenarios.

Caleb Larson holds a Master of Public Policy degree from the Willy Brandt School of Public Policy. He lives in Berlin and writes on US and Russian foreign and defense policy, German politics, and culture. This article first appeared earlier this year and is reprinted due to reader interest.