Here's Why the Marines Stopped Developing a Ship-Launched Drone 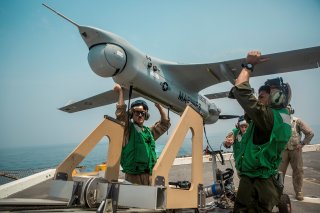 Here's What You Need to Remember: And with the Marines giving up on their radar-equipped drone, the small carriers likely will lack the wide sensor coverage that the bigger vessels can project.

The U.S. Marine Corps has chosen not to develop a ship-launched drone for the airborne early-warning role.

David Axe served as Defense Editor of the National Interest. He is the author of the graphic novels War Fix, War Is Boring and Machete Squad. This first appeared in August 2019.