Hiring Privateers to Combat China is a Ridiculous and Risky Idea 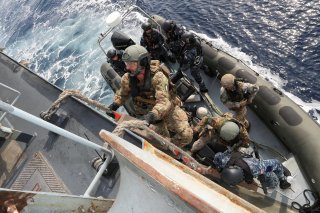 Here's What You Need to Remember: Cancian ignores the possibility that China might retaliate against American privateering by issuing letters of marque to its own seafarers.

China has a 9,000-mile coastline and, by one recent count, the world’s second-largest merchant fleet after Greece’s. Thousands of ships in all.

So how could the United States even hope to blockade China and starve its economy during a major war?

One retired U.S. Marine has an idea, and it’s not a good one. Privateers.

“Privateering, authorized by letters of marque, could offer a low-cost tool to enhance deterrence in peacetime and gain an advantage in wartime,” Mark Cancian proposed in an article in Proceedings, the professional journal of the U.S. Naval Institute.

“In wartime, privateers could swarm the oceans and destroy the maritime industry on which China’s economy—and the stability of its regime—depend. The mere threat of such a campaign might strengthen deterrence and thereby prevent a war from happening at all.”

Never mind that, in deploying privateers, the United States might invite privateering along its own shores.

Privateers, in essence, are pirates, albeit pirates with official state sponsorship. In past centuries, governments often authorized, via “letters of marque,” private seafarers to arm themselves and attack rivals’ merchant ships.

The privateers kept the spoils. The sponsoring government benefited from the economic hit its enemy took from each seizure.

Modern privateering “would attack an asymmetric vulnerability of China, which has a much larger merchant fleet than the United States,” Cancian wrote. “Indeed, an attack on Chinese global trade would undermine China’s entire economy and threaten the regime’s stability. Finally, despite pervasive myths to the contrary, U.S. privateering is not prohibited by U.S. or international law.”

Hiring private raiders would be faster than expanding the Navy, Cancian argued. “Letters of marque could be issued quickly, with privateers on the hunt within weeks of the start of a conflict. By contrast, it would take four years to build a single new combatant for the Navy.”

Cancian in his article acknowledged one of the greatest risks privateering could pose to law and order and American credibility in the world. As the Pentagon learned the hard way during the Iraq war, mercenaries can be difficult to regulate and control. And they can be unpredictable.

In 2007, gunmen working for private military company Blackwater murdered 17 civilians in Baghdad’s Nisour Square. The incident soured U.S.-Iraqi relations and alienated American troops from the very people they were trying to protect.

But Cancian stressed the benefits of recruiting for-profit maritime forces. “The existing private military industry would doubtless jump at the chance to privateer,” he wrote.

“Dozens of companies currently provide security services, from the equivalent of mall guards to armed antipiracy contingents on ships. A large pool of potential recruits has shown willingness to work for private contractors. At the height of the Iraq war, for example, the United States employed 20,000 armed contractors in security jobs.”

Cancian ignores the possibility that China might retaliate against American privateering by issuing letters of marque to its own seafarers. The former Marine seems to think that the United States’s relatively small merchant marine, numbering just 250 U.S.-flagged ships, makes it all but impervious to privateering. “Even if China threatens to dispatch its own privateers, U.S. vulnerability is comparatively small.”

But those 250 U.S.-flagged ships aren’t the only merchant vessels that the United States relies on for trade. Indeed, the U.S. merchant marine is deceptively small because the U.S. tax code and regulations incentivize shippers to flag their vessels under foreign flags.

If China authorized privateering, the raiders could target all shippers serving U.S. ports, not just shippers with U.S.-flagged vessels. The simple truth is that the United States depends on foreign trade nearly as much as China does, and that trade mostly travels in ships.

David Axe served as defense editor of The National Interest. He is the author of the graphic novels War Fix, War Is Boring and Machete Squad. This article is being republished due to reader interest.