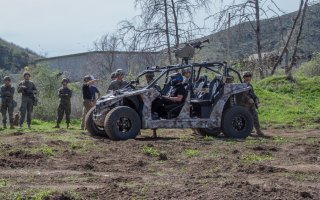 Here's What You Need to Know: The U.S. Marine Corps has been experimenting with arming its JLTVs with anti-tank missiles such as TOW missiles and Javelin missiles.

Pentagon war planners have been trying to find better ways to fight against improvised explosive devices, hit-and-run small group ambushes, and asymmetrical terrorist tactics during two decades of warfare in Iraq and Afghanistan. Many of its evolving weapons platforms over the past decade, born in an era of counterinsurgency, were engineered with a mind to winning major mechanized warfare engagements in heavy combat.

For example, the Army’s Joint Light Tactical Vehicle (JLTV), was originally designed as a next-generation Humvee that would bring new speed, protection, and combat performance to both counterinsurgency operations and major power warfare. Now, JLTV-maker Oshkosh Defense, the U.S. Army, and other U.S. allied militaries are arming the vehicle with anti-air missiles, anti-tank weapons, and advanced fire control technology to enable heavy combat.

The U.S. Marine Corps has been experimenting with arming its JLTVs with anti-tank missiles such as TOW missiles and Javelin missiles. Also, U.S. allies have been firing off from the vehicle the Israeli-built SPIKE Non-Line of Sight Missile.

Unlike a counterinsurgency mission wherein an advancing ground convoy would operate with established air superiority, a major-power warfare contingency would require an air-defense component. This is where a missile-armed JLTV comes into play. The JLTV could fire missiles that intercept or destroy attacking enemy helicopters, drones or even approaching armored vehicles.

Expeditionary warfare has had an influence on the type of weapons that are being added to the JLTV. Of course, adding heavier weapons—such as anti-tank or air defenses—gave the vehicle new attack capabilities. Also, it made possible offensive combat maneuvers previously thought to be impossible. A JLTV is much faster and easier to deploy than other armored combat vehicles. Additionally, the increased ranges and precision with which its weapons can strike provides this lighter-weight tactical wheeled vehicle with an anti-armor capability as it closes in on enemy forces.

Army and U.S. Marine Corps leaders refer to this concept of operation as putting “lightweight mounted fires” on fast-moving tactical vehicles, a scenario that could involve arming the JLTV with anti-tank missiles or other precision anti-armor weapons. This move makes sense given longstanding concerns about tank mobility and its ability to deploy in certain environments. While the tried and tested Abrams tank is combat-proven and not likely to disappear anytime soon, it does operate with certain limitations such as an inability to cross certain bridges, slower speeds, logistical challenges with high fuel consumption, and, perhaps most of all, an inability to conduct rapid-deployment expeditionary warfare.

Oshkosh Defense has built at least ten thousand of its JLTVs for the U.S. Army, U.S. Marine Corps, and a growing sphere of international partners. Now, as many as seven U.S. allied countries, including the UK, Belgium, Montenegro, Slovenia, Lithuania, Brazil, and North Macedonia, are using thousands of the JLTVs.