How America's Lewis Gun Became a Staple of the British Military 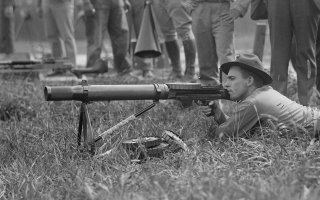 Here's What You Need to Know: The gun served as late as the Korean War.

The Lewis gun’s invention is credited to Isaac Newton Lewis, who designed and built his machine gun before the First World War. At the time, Lewis was an officer in the U.S. Army. Despite his proximity to the military, his machine gun design was not approved for service with the United States, possibly thanks to a bad relationship with his superiors.

In part due to his design’s rejection, Lewis relocated production to Europe. His design was evaluated by the British Army and ultimately accepted into British service. Britain’s entry into World War One soon after adopting the Lewis gun ensured its success, where it was prized for its portability and large-capacity magazines.

The Lewis gun is easily identifiable by the large barrel shroud that runs the length of the barrel and extends several inches past it. This shroud pulled air from the back of the shroud forwards, over a finned aluminum heatsink fixed to the base of the barrel and receiver, cooling the barrel.

In British service the Lewis gun was chambered in .303 British, the standard British Army rifle cartridge. Cartridges were loaded into large pan magazines, the large metallic disks that sat just in front of the gun’s rear sight. The magazines came in two sizes, a thin 47-round or bulkier 97-round size.

Though the Lewis gun weighted about 13 kilograms, or 28 pounds, it was significantly lighter than other machine guns of the era, which typically weighed in excess of 50 pounds and were mounted on tripods. For comparison, the British Vickers machine gun weighed up to 23 kilograms and was not man-portable. The Lewis gun’s low weight meant that if necessary, a single man could load, fire, and carry the gun.

By the late 1930s, the Lewis gun had been phased out of service in favor of more portable and faster-firing alternatives. Thanks to massive British equipment losses at the Battle of Dunkirk in 1940, Lewis guns that had been sitting in armory storage were refurbished and rushed back into service, where they served in all major campaigns with the British.

Lewis guns chambered in the American .30-06 cartridge were also used by the United States during World War Two, though the Lewis gun’s American service was limited to Naval, Marine, and Coast Guard elements.

Japan also took a liking to the Lewis gun, and built a slightly modified copy in the early 1930s. The Japanese Type 92 as it was called, did not retain the barrel shroud, and it was later discovered the that Lewis gun’s shroud was actually not necessary for normal operations. The Type 92 opted for the larger 97-round pan magazine instead of the smaller 47-round pan, though the Japanese copy did retain virtually the same cartridge.

Post-war, Lewis guns were quickly retired, though they did see service in other conflicts, and some were fielded during the Korean War. The Lewis gun’s design influenced several later machine guns designs, including the American M60 machine gun.