How to Avoid a U.S.-China War? This Picture Is a Massive Clue. 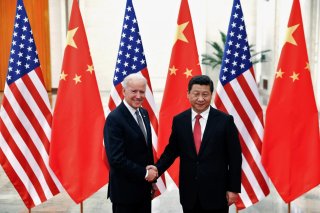 Here's What You Need To Remember: Both China and the U.S. have dramatically increased wargames, training exercises, drone and bomber patrols and fighter jet incursions near or into sensitive areas, developments which massively raise the possibility of some kind of catastrophic misunderstanding.

“Crisis Communications” was the declared focus on the discussions, according to a Pentagon statement.

“The two sides agreed on the importance of establishing mechanisms for timely communication during a crisis, as well as the need to maintain regular communication channels to prevent crisis and conduct post-crisis assessment,” the Pentagon report said.

A Chinese-government backed newspaper also welcomed the announcement, reporting that U.S. military leaders were “cautious and reasonable” because they were aware of how horrible a U.S.-China war would be.

Are these U.S. and Chinese remarks merely shallow comments? Or do they represent some kind of measurable or significant step forward? No real way to know, as both sides have talked before only to see tensions and near-crises emerge shortly thereafter.

The Global Times, a pro-Chinese tabloid, also criticized President Donald Trump for what it claimed were efforts to seek an escalation in U.S.-China tensions for political reasons to create an “October Surprise.” Would some kind of sudden engagement, confrontation or military crisis with China distract voters or lead them to favor a Trump presidency? Such an unanticipated scenario, it seems, could play either way politically, as many might wish to quickly make an immediate change to avert the catastrophe of major war.

“Although some officials in the Trump administration want to create an ‘October surprise’ by using US-China tensions, they are unlikely to risk a war with China, so military provocations by the US might be reduced,” the Chinese paper states.

There is not much, if any, actual evidence that the current administration has been basing its China posture upon political premises, although such possibilities are likely not unprecedented.  Chinese military modernization, and its pace of shipbuilding and weapons development in particular, have been the source of very serious concerns spanning many years and several administrations.

At very least, what the crisis-conscious discussions do is point to the complex, nuanced and highly ambiguous U.S.-China relationship, something characterized by cooperation and numerous business relations offset by massive and fast-growing tensions. In recent years, U.S. Navy ships made port visits to Chinese ports and, at one point, China even participated in the U.S. led large-scale Rim of the Pacific exercise. There have long been nuances associated with U.S.-Chinese entanglements. It has been multi-faceted and two-fold.

On the other side of things, the prospect of an actual collision, confrontation of sudden exchange of fire in crisis, due to either provocations or misunderstandings. The chances for this have massively increased in recent months, given the large uptick in hostile operations. Both China and the U.S. have dramatically increased wargames, training exercises, drone and bomber patrols and fighter jet incursions near or into sensitive areas, developments which massively raise the possibility of some kind of catastrophic misunderstanding.

Kris Osborn is defense editor for the National Interest. Osborn previously served at the Pentagon as a Highly Qualified Expert with the Office of the Assistant Secretary of the Army—Acquisition, Logistics & Technology. Osborn has also worked as an anchor and on-air military specialist at national TV networks. He has appeared as a guest military expert on Fox News, MSNBC, The Military Channel, and The History Channel. He also has a Masters Degree in Comparative Literature from Columbia University. This article was originally published last month.