How Does North Korea Fill Its Coffers? Study the Picture. 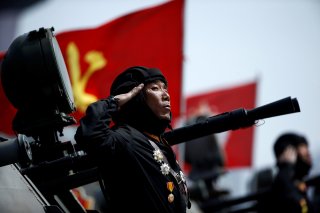 Here's What You Need to Remember: North Korea’s continued success in growing and expanding its illicit arms trade is perhaps the starkest illustration of a trend that has long drawn the alarm of Korea experts: the international sanctions regime has proven largely toothless, if not counterproductive, as a means of starving DPRK’s military-industrial complex.

The growing cascade of UN and EU-imposed sanctions in the wake of Pyongyang’s 2003 withdrawal from the Nuclear Non-Proliferation Treaty has certainly cut into North Korea’s arms export bottom line, but Pyongyang has proven remarkably adept at discovering new ways to skirt the sanctions regime. Though legally binding, none of the nine U.N Security Council Resolutions that make up the bulk of North Korea’s sanctions burden are self-enforcing. It falls on every individual member state to take adequate action against financial dealings with Pyongyang -- a mandate that is being met with mixed success across the third and developing world.