How Iran Could Hold the Persian Gulf Hostage Against America 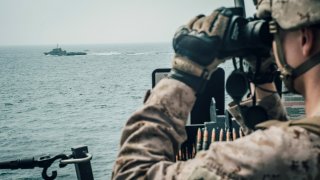 Here's What You Need To Remember: From the IRGCN’s standpoint, the U.S. Navy’s advanced warships bristling with missiles are the Death Star, and its swarms of fast boats the plucky, maneuverable fighters capable overwhelming advanced defenses to deal a lethal blow.

Sébastien Roblin holds a master’s degree in conflict resolution from Georgetown University and served as a university instructor for the Peace Corps in China. He has also worked in education, editing, and refugee resettlement in France and the United States. He currently writes on security and military history for War Is Boring. (This first was posted last year.)