How Iran Uses Tanks to Try and Dominate the Middle East 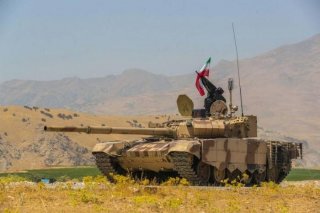 Here's What You Need To Remember: Iran’s domestic defense industry does not produce world-class weapon systems. But it is good at upgrading existing platforms and keeping them relevant.

Iran is apparently not the only Type 72Z operator. The investigative website Bellingcat identified a number of 72Z tanks near Tikrit in Iraq with Iraqi militias that were apparently used to fight against the Islamic State. The tanks were identified by the unique tan and burgundy camouflage pattern and turret-mounted smoke grenade launchers used for concealment. Bellingcat did not identify if the tanks were crewed by Iranian tankers or Iraqi militias, but acknowledged that Iran’s industrial capability is one of its main foreign policy tools in the Middle East.