How to Kill Hypersonic Missiles? Russia's S-500 System Is Here. 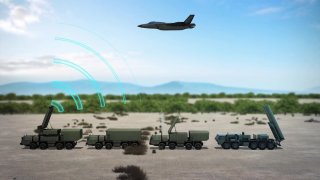 Here's What You Need to Remember: The new hypersonics arms race to find new missiles and better defenses is on.

Russia is reportedly working on such technology, and last week Russian Federation President Vladimir Putin told reporters that that the S-500 surface-to-air missile/anti-ballistic missile system could be a possible “antidote” against an enemy’s hypersonic missiles.