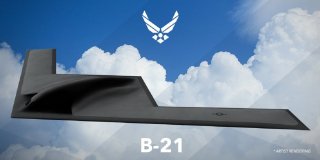 The United States’ newest bomber, the B-21 stealth bomber, or officially known as the B-21 Raider, will be the stealthiest bomber ever built — and it will soon take to the skies. Initially, the Air Force bet on a late-2021 initial fly date after the first airframe completes engine tests and ground taxiing evaluations, though that will likely be pushed back to 2022 due to the ongoing pandemic.

While the bomber surely will have amazing capabilities that dwarf the much older B-2 Spirit, as the first B-21 rolls off assembly lines, exactly how many bombers will ultimately enter Air Force fleets remains to be seen.

Though the newer B-21 bears a superficial resemblance to the elder B-2 Spirit stealth bomber, the new bomber is said to be much more advanced, with significantly stealthier features in place that the Air Force says are at least two generations beyond the B-2. Like the B-2, the Raider will carry both nuclear and conventional munitions, with the necessary stealth capabilities to hold any target on the globe at risk, regardless of how well defended.

Outward similarities aside, the B-21 is a significantly more flexible platform and does not require climate-controlled hangars as its older counterpart does. Unlike the B-2, the Raider is designed to revive updates to its software quite literally on the fly, helping to ensure that the bomber is optimized for whatever mission it faces in near-real-time.

The bomber’s production has also differed from that of the B-2. Rather than building a 100% perfectly optimized airframe, the Air Force has pursued an 80% requirement that would see the aircraft able to complete most of the missions it would face, with further optimizations integrated after manufacture. This strategy sacrifices some immediate performance for a lower overall price, though the Air Force has asserted that even with some performance sacrifices the B-21 is very significantly more capable than the B-2.

Introducing the B-21 couldn’t come at a more opportune time. Just last week, the Air Force began retiring the first 17 of their B-1B Lancer bombers. The Air Force also has plans to slowly reduce the number of B-2 Spirits in service as well, relying instead on the brand-new B-21s as well as the comparatively ancient B-52 long-range bombers.

In total, the Air Force would like to have a 220-bomber fleet, which considering B-52 retirements, would keep around 76 of the venerable though thoroughly aged Cold War-era bombers in active service. Plans for producing about 100 B-21s has lead to some speculation about how to fill the roughly 45 bomber-sized gap. While Northrop Grumman, the firm behind the B-21, asserts that it has the necessary production capacity to increase the number of B-21s past the 100 airframe mark, officials within the Air Force have suggested that some expendable aircraft could be needed to fill the bomber hole.

There is some ambiguity concerning when the first of the Air Force’s B-21 Raiders will be fit for duty, with some officials vaguely mentioning mid-2020, while other officials have asserted sometime later in 2027 or even 2028. Regardless of when exactly the initial tranche of bombers takes off, they'll own the skies. But how many will own those skies remains an open question for sure.