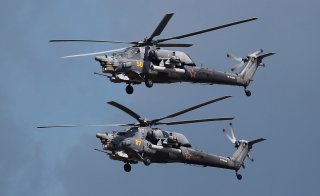 Here's What You Need to Remember: The Russian paper also makes vague references to the helicopter’s communications systems and “network-centric” capabilities and its ability to enable aircraft to “interact in a group.”

Called the Russian “Night Hunter,” the new Mi-28NM is built with modernized engines, a new fuselage, and an auxiliary power plant able to support next-generation onboard networking and electronic warfare systems.

There are several interesting aspects to this, including the use of drones for manned-unmanned networking and, in a fashion quite similar to U.S. conceptual thinking about networks, massively reduce sensor-to-shooter time. This reference to networking and group or “meshed” information sharing across multiple combat “nodes” in real time closely mirrors cutting edge U.S. thinking on modern war, a circumstance which leads one to wonder if Russian innovators are truly gaining breakthrough traction with new, secure networking technologies or simply copying the current U.S. strategy.