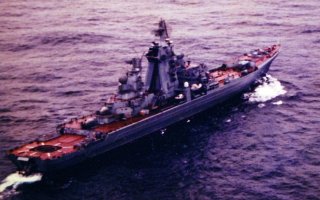 Here's What You Need to Know: Moscow's preparations for Anti-Carrier Warfare involved all three arms of the Soviet navy.

In the event of World War III, the Soviet Union planned to go after the U.S. Navy’s fleet of aircraft carriers in a big way. The carriers were a flexible and powerful weapon that could operate at the peripheries of Soviet power, doing everything from supporting land operations to launching nuclear strikes. The Soviet Navy and Air Force built battlecruisers, cruisers, submarines and bombers armed with formidable anti-ship missiles to destroy these America’s carriers and ensure victory in Western Europe.