How Is Russia's Su-34 Fighter-Bomber So Good? 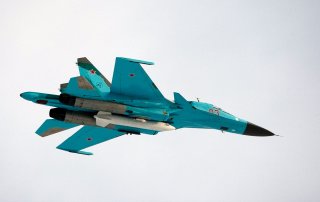 Key Point: This plane is rugged and can handle all kinds of conditions. It is well-regarded for a very good reason and still serves to this day.

The Sukhoi Su-34 is perhaps one of Russia’s most capable all-weather jet fighters, capable of ground, surface, and air attack. It’s seen service in Syria — and could be used to defend Russian interests in the Arctic.

The Su-34 is a dual-engine, all-weather bomber/ground attack aircraft intended for use against naval and ground-based targets. It will allegedly replace both the Su-24 sweep-wing strike fighter and the Tu-22 bomber.

The Su-34 has a side-by-side arranged cockpit in which the pilot and copilot/navigator/weapons officer sit next to each other. Access to the cockpit is via a built-in stepladder that goes from behind the landing gear and into the rear of the cockpit.

According to the Sukhoi website, the cockpit is large and roomy enough to stand up inside. There is also apparently enough room for one of the two pilots to lie down — there’s even a toilet and a small galley inside.

The cockpit capsule is also armored against small arms and anti-aircraft fire with substantial titanium plating. Other aircraft components in the airframe are also armored.

In addition to 12 hardpoints on the wings and fuselage for a variety of bombs and missiles, the Su-34 has an internally-housed 30-millimeter cannon for ground attack.

The Su-34 is an odd duck for a few reasons. In addition to it’s duckbill-shaped fuselage (the aircraft is apparently known within the Russian military as “Duckling” or “Duckbill”), the Su-34 combines the high payload and range of a medium- or long-distance bomber with the maneuverability of a fighter.

This is partly attributable to the Su-34 three-surface design. That is to say, in addition to wings and tail surfaces providing lift, there is also two canard lifting surfaces just rear of the cockpit that also provide additional lift and aid in maneuverability.

One of the Su-34’s more noticeable features is the distinctive tail boom on the rear of the fuselage. Accord to the company website, the boom houses a brake parachute, auxiliary power unit, additional fuel, and a smaller rear-facing radar antenna that can warn the pilots if missiles are incoming.

The Russian state-owned TASS media agency reported in 2015 that Russian Su-34s were being armed with air-to-air missiles following the fatal downing of a Su-24 by Turkish aircraft in which one pilot was killed.

In addition to fairly extensive Su-34 use in Syria as a bomber, the platform also seems to be playing a larger role in Russia’s Arctic ambitions. Recent construction on Russia’s arctic islands has led to speculation that Su-34 could be intended to beef up Russia’s Arctic defenses.

According to a recent risk assessment by Danish intelligence, Russian aircraft at some of Russia’s northernmost bases are “capable of reaching the airspace over northeastern Greenland with little prior warning,” including locations that house Su-34s.

This could threaten American and NATO interests in the region, the publication explained that “supported by air-to-air refueling, Russian combat aircraft could reach Thule Air Base, a key installation in the U.S. space and missile defense architecture, while simultaneously enlarging Russia’s A2/AD bubble into the North Atlantic.”

A Good Run for their Money

The facts are that the Su-34 has been combat tested in Syria. It’s a capable platform. Thanks to its large size and rear tail boom with extra fuel capacity, it has good range — and is very maneuverable.

Though it doesn’t have any stealthy characteristics, the Su-34 is nonetheless a capable platform, especially against other 4++ generation airframes. That means the Su-34 probably won’t go away anytime soon.