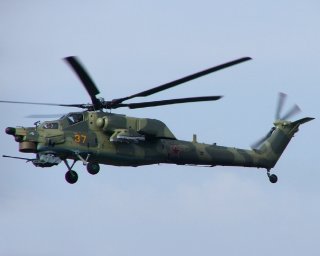 Here's What You Need To Remember: The Russian paper also makes vague references to the Mi-28's communications systems and “network-centric” capabilities and its ability to enable aircraft to “interact in a group.”

Shcherbina also explained that the layout of the chopper’s fuselage has been newly configured to integrate new targeting sights. The report also makes unspecified statements about the aircraft’s defensive aids suite, claiming it can defeat an enemy's “ground and airborne air defense systems.” It does not seem at all clear what this might mean, as it seems extremely unlikely that even an extremely advanced helicopter with a new generation of sensors and countermeasures would be able to all air defenses, given that helicopters fly at lower altitudes and have structural limitations regarding how stealthy they can be.

There are several interesting aspects to this, including the use of drones for manned-unmanned networking and, in a fashion quite similar to U.S. conceptual thinking about networks, massively reduce sensor-to-shooter time. This reference to networking and group or “meshed” information sharing across multiple combat “nodes” in real time closely mirrors cutting edge U.S. thinking on modern war, a circumstance which leads one to wonder if Russian innovators are truly gaining breakthrough traction with new, secure networking technologies or simply copying the current U.S. strategy.