How the U.S. Navy Could Prevent a "Fait Accompli" Between China and Taiwan 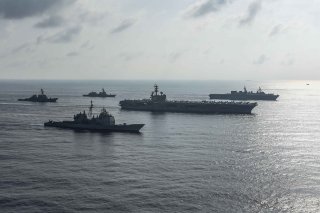 Here's What You Need to Remember: Perhaps taking over some small islands in the South China Sea could happen quickly, but any kind of an invasion or offensive attack beyond the smallest scale would most likely be detected and therefore anticipated well in advance of any actual combat action.

The U.S. Navy is preparing to defend against and prevent what it identifies as possible Russian or Chinese attempts to accomplish a “fait accompli,” by essentially annexing, invading or taking over a particular area faster than the United States and its allies can respond.

Through careful consideration of the strategies and tactics likely to be employed by Russia or China in this kind of scenario, a recently published new Navy strategy document explains that one of these countries would likely seek to use surprise and rapid assault to seize territory and then quickly reinforce it with long-range fires to deter any potential response. The strategy, called “Advantage at Sea: Prevailing With Integrated All Domain Naval Power,” says any Russian or Chinese “fait accompli” strategy would seek to quickly make any military response to their invasion “disproportionally costly” by deploying heavy firepower to defend the seized territory.

This kind of possible scenario with China is precisely why the U.S. Navy continues to maintain a large, steady “presence” of forces in the Pacific, in part so it can respond quickly and appropriately in the event that China were to try to take over Taiwan or key areas of the South China Sea.

While the risks entertained by the strategy seem quite realistic and grounded in logistical and technological criteria, it may not be entirely clear that any kind of Chinese offensive would happen too quickly for the U.S. Navy to respond. Perhaps taking over some small islands in the South China Sea could happen quickly, but any kind of an invasion or offensive attack beyond the smallest scale would most likely be detected and therefore anticipated well in advance of any actual combat action. This is why the Navy places such value upon forward presence, and regularly operates drones, submarines and even Carrier Strike Groups in areas within reach of any potential invasion site. This would of course include the South China Sea, Taiwan, Japan and parts of Australia or other regional areas China could potentially target.

A Chinese amphibious assault coming across the Taiwan strait would likely be detected by satellite or drone surveillance well in advance of there being any possibility of landing ashore. However, should the U.S. Navy or allied forces armed with airpower, submarines, carriers or heavy combat warships not be within any reachable proximity, there may be few options available to commanders in terms of trying to stop, thwart, block or derail any kind of offensive.

The Navy, Coast Guard and Marine Corps strategy highlights some broad strokes or war plan “parameters” within which a response might operate, of course without offering much detail.

“Within the most contested battle spaces, we will destroy adversary forces by projecting power from attack submarines, fifth-generation aircraft, naval expeditionary forces, unmanned vehicles, and maritime raids,” the strategy writes. As part of what could be called a general  “war plan” roadmap of sorts, the Navy document adds the possibility of non-kinetic tactics as well, to include jamming. The concept is to remain capable of a rapid response by having powerful combat assets regularly operate in contested areas and, as the strategy states, operate “maneuverable strike forces—composed of multiple carrier strike groups, surface action groups, and expeditionary strike groups, and augmented by unmanned platforms—will launch overpowering air and missile attacks from unexpected directions.”

The concept is to counter the enemy with “multiple axes of attack” such that air assets on alert in the region including long-range fires from coastal areas, bomber patrols on alert, undersea attack submarines and even warships operating in coordination with air, surface and undersea drones to enable U.S. Navy forces to prevail . . . even if outnumbered.

Yet another interesting tactic of possible use in preventing or thwarting a Chinese or Russian “fait accompli” is to pursue something the strategy refers to as “sea control” and “sea denial.”