The Howa 1500 Bolt Action Rifle Is Well Worth Its Price 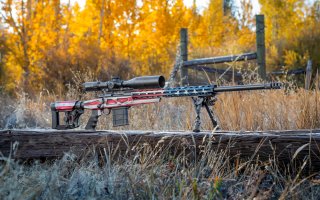 Here's What You Need to Know: The Howa 1500 series remains a well-built, durable and accurate bolt action rifle for target shooting and hunting.

Name some of the top-selling bolt action rifles of 2020 so far and companies such as Remington, Ruger, Mossberg, Winchester and even CZ-USA are likely to be expected. So what is the Howa 1500 doing on the NRA's American Hunter list of top sellers?

Clearly a lot of shooters know something that the rest of us don’t!

The Japanese-made Howa doesn’t have the name recognition of the larger American (or Czech) brands—to the point that some gun writers have called the Howa 1500 the most underrated rifle produced today. The bolt action centerfire rifle isn't exactly new—nor is its design entirely original.

Howa Machinery, Ltd. isn’t a new company, it was founded in 1907 as Toyoda’s Loom Works, which later merged with Showa Heavy Industries and it was only in 1936 that the company began to make rifles, artillery shells and airplane parts. During World War II the company manufactured the Arisaka Rifles (Type 99) and parts for the Type 38.

After the end of World War II it made textile machinery but in 1952 was contracted to make a copy of the United States military’s M1 Garand and M1 Carbine for the newly formed Japanese Self Defense Forces (JSDF) as well as airplane bombs for the U.S. military.

Throughout the Cold War and to the modern-day Howa has produced small arms exclusively for the JSDF, and unlike many arms manufacturers export few if any of its military designs. This includes the Type 98, which remains in use as the JSDF’s main battle rifle.

Today, the company has manufactured products and components for other firms, notably the American firearm manufacturers Mossberg, Smith & Wesson and Weatherby. In fact, the action for the M1500 is often used by other firms worldwide and sold under other brands—an example of this is the Weatherby Vanguard, which is essentially a Howa 1500 with a different stock.

What is also notable about the Howa 1500 is that it was originally designed as a hunting rifle in the late 1970s and introduced as the M1500 based on the 1960s-era Golden Bear Rifle, but a heavy barrel version has been used by police forces in Japan. That version has also been used as by the Special Security Team of the Japan Coast Guard and used alongside the Type 64 designed marksman rifle.

Today the M1500 is available in a variety of configurations including a simple synthetic stock or a modern chassis. It is available in a number of popular calibers. All the rifles feature a three-position safety, which allows the shooter to unload the rifle while on safe or as a way to lock the bolt shut.

Since its introduction more than forty years ago, the Howa 1500 series has remained a well-built, durable and accurate bolt action rifle for target shooting and hunting. As a mid-range rifle, it is more affordable than the higher-priced options but has superior quality and craftsmanship. There are certainly better rifles out there in the category but few that are better value for what you get.