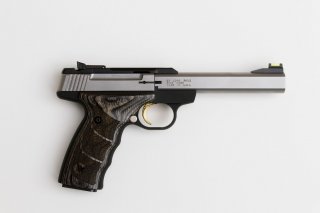 During his prolific career, John Moses Browning became arguably the most successful American firearms designer; and while perhaps not as famous as Leonardo de Vinci, Benjamin Franklin, or Thomas Edison, it would still be fair to suggest that John Browning was really the gun world’s combination of all three.

Browning developed his first firearm while working in his father’s gun shop when he was thirteen years old, and he was awarded the first of his 128 firearm patents by the age of twenty-four. During his career, he worked for Winchester Repeating Arms Company and the Colt's Patent Fire Arms Manufacturing Company. He also designed firearms for the military including the Browning Automatic Rifle, M1919 machine gun and the Colt 1911 pistol.

While he was known for his work on military machine guns and automatic rifles—beginning with the Colt Browning M1895—he and his brother Matthew also launched a successful company aimed at civilian products. Founded in Ogden, Utah in 1878 as the John Moses and Matthew Sandefur Browning Company, it sold shotguns, rifles, and pistols—as well as fishing rods and reels, gun safes, sport bows, knives, and even bicycles.

It was the company bearing the family name where he developed his Browning 22 Semi-Automatic Rifle, which was the first production semi-automatic rifle chambered in .22LR. For more than one hundred years it has remained the first gun for many shooters. Among the final designs worked on by John Browning was his Browning Hi-Power, a design completed by Dieudonné Saive—that while over eighty years old is still similar to the so-called "Wonder Nines" of the early 1980s. The Hi-Power, which saw use as a military sidearm in World War II, was noted for being simple to disassemble, had a large capacity magazine and was reliable and rugged.

Another lasting legacy of Browning was his Superposed, the first over and under shotgun, which introduced a number of innovations including a single select trigger. While it was considered somewhat revolutionary, Browning’s design—which was completed by his son Val A. Browning—actually dated back to the 1880s. It has become the standard for competitive shooters. The basic design has remained virtually unchanged, even in an era of autoloaders, synthetic stocks and release triggers. Simply put, the Superposed has become recognized as the most reliable shotgun made to date!

Even after John Browning’s death in 1926, the Browning Arms Company continued to remain a leading manufacturer of civilian sporting arms. This includes its X-BOLT line of bolt-action rifles, which is designed for long-range shooting. The rifles feature an X-Lock scope mounting system, which offers shooters the adjustments necessary to use a variety of optics, while the X-BOLT Feather Trigger features an adjustable trigger pull that can be tuned by the shooter.

Though Browning Arms Company is now a fully owned subsidiary of Belgian’s FN Herstal, and many of its products are made in Japan, this is a company that has truly remained an American legend for over 140 years.