From Infantry To Tanks, America's M1919 Machine Gun Fought Everything 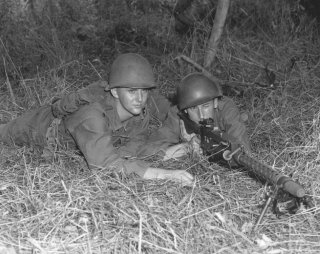 Here's What You Need To Remember: The M1919 was eventually retired from the battlefield completely, but not before completing seven decades of service. John Browning’s machine gun was a clear example of a well-designed weapon that defied obsolescence. Today regulated to museums, the M1919 was one of the most iconic weapons in the history of U.S. military service.

America’s entry into the First World War saw it short of many of the new weapons of war considered vital for the European battlefield. One of those weapons was the machine gun. The M1917 medium machine gun, which later evolved into the M1919 machine gun, served for more than seventy years across the globe. First used to stop infantry attacks, in its final years it was used to stop anti-tank missile attacks, a testament to its versatility.

In the early 1900s, firearms inventor John Moses Browning set to work on a modern machine gun. Browning, who would later go on to develop such iconic guns as the 1911 series handguns and the Browning Hi Power, invented a machine gun that he thought would stir interest with the U.S. Army.

Browning’s machine gun was fairly simple by today’s standards. The machine gun utilized energy generated by the rapid expansion gunpowder gasses to push the barrel and bolt five-eighths of an inch to the rear of the weapon. After a short recoil impulse the bolt is unlocked and the barrel halts. An accelerator then throws the bolt to the rear and the mechanism advances the belt feed mechanism. The recoil spring then bounces the bolt back forward, whereupon it picks up a fresh cartridge and goes into battery.

Browning’s machine gun was 38.5 inches long with a barrel length of twenty-four inches. The weapon was chambered in .30 caliber and fed from fabric belts of ammunition holding 250 rounds each. The belts were stored in a metal ammunition can attached to the left of the gun. Rate of fire was approximately 450 rounds per minute and the gun utilized a pistol grip.

The gun was water cooled, with a large cylindrical water tank surrounded the gun barrel and providing a heat sink to draw away heat from sustained firing. With water, the machine gun weighed forty-one pounds. The gun was fired from a tripod for maximum stability.

There was only one problem with the machine gun: The U.S. Army and Marines didn’t want it. That attitude changed swiftly in 1917 however with the entry of the United States into World War I. Just over 68,000 of the machine guns, designated M1919, were manufactured before the end of the war by Remington Arms-Union Metallic Cartridge Company, Colt’s Patent Firearms, and New England Westinghouse. A larger version of the gun, the M2, was chambered in the bigger, more powerful .50 caliber round and is still used to this day.

In 1919 the M1917 machine gun underwent a major modification, trading its water cooling mechanism for air cooling. The new M1919 had a heavier barrel to resist overheating and a steel jacket dotted with holes to allow air to flow through. The water cooling tank was discarded entirely. This did away with the need to periodically refuel the water tank, something that had ruled the M1917 out for aircraft use. The use of water cooling had also proven problematic for use on tanks and other armored vehicles, as the water tank was on the barrel and stuck out from behind the tank’s armor plating. If the tank were punctured by a bullet the machine gun would rapidly overheat.

The inter-war years saw the M1919 added to the U.S. Army’s tank and combat car fleets, including the M2A2 light tank and M1 combat car. The M1919 also took to the skies as defensive guns for fighter and attack aircraft, including the Sparrowhawk fighter, the Douglas Dauntless dive bomber, and the Martin B-10 bomber. As tanks and aircraft took on stronger engines and heavier armament, the M1919 was gradually relegated to a secondary role, replaced by 37-millimeter guns, 20-millimeter guns, or the .50 caliber M2 variant.

The outbreak of World War II saw both the older M1917 and M1919 assigned to U.S. Army units, particularly infantry, on a wide scale. In 1943, a new M1919A6 version incorporated many of the features seen on today’s medium machine guns, including a shoulder stock, bipod, carrying handle, lighter barrel, and flash suppressor. The lighter -A6 variant could more easily keep up with advancing infantry and could fire from a lower position thanks to the use of a bipod.

The M1919 was used through the end of World War II and through the Korean War. In 1959, the Army began to replace the M1919 with the newer M60 general purpose machine gun. The M60 was even lighter, chambered in the NATO standard 7.62-millimeter, had a faster rate of fire and incorporated a quick change barrel mechanism. The M1919 however remained in U.S. military inventories as the secondary armament of armored vehicles, aircraft, and small boats.

In the early 1970s, the M1919 enjoyed one last unexpected burst of popularity. In the Middle East, the Israeli Armored Corps suffered horrendous losses in the 1973 Yom Kippur War, particularly from AT-3 “Sagger” anti-tank missiles. The manually steered Saggers produced a telltale blowup of dust and debris upon launch that could be spotted within the effective range of the missile, and the missile itself took several seconds to reach its target. Many Israeli tanks had at least two M1919 machine guns, in addition to the heavier M2, mounted on the turret and covering different arcs. If a missile launch was detected the tank crew could quickly swing a machine gun in its direction and open fire, killing, injuring, or suppressing the missile team before the missile hit home.

The M1919 was eventually retired from the battlefield completely, but not before completing seven decades of service. John Browning’s machine gun was a clear example of a well-designed weapon that defied obsolescence. Today regulated to museums, the M1919 was one of the most iconic weapons in the history of U.S. military service.