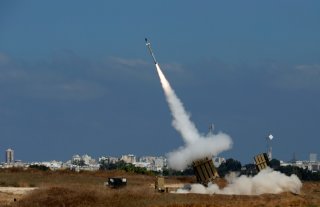 Here's What You Need to Remember: Israeli defense officials expect the Arrow-4 missile system to replace the Arrow-2 over the coming decades, with Jacob Galifat, general manager IAI's MLM Division, said in a statement that the upcoming missile system will be the most advanced of its kind in the world.

The Israeli Missile Defense Organization announced in February that Israel and the United States are moving forward with a joint project to develop the Arrow-4 missile defense system. That announcement was followed by a July press statement from the IAI, which further explained that Israel has entered a Memorandum of Understanding with Lockheed Martin to collaborate on air and missile defense efforts. This development is accompanied by reports suggesting that Lockheed Martin will not only be involved in joint efforts to develop the Arrow-4, but will also produce the next batch of Arrow-3 missiles. The July statement noted that Lockheed and the IAI would establish an executive steering committee to coordinate and channel their collaboration.

“Our long-standing relationship with the State of Israel and its defense industries opens new opportunities for Lockheed Martin, aimed to expand our businesses around the world while delivering unmatched IAMD capabilities to our global customers,” Lockheed Martin’s senior vice president of global business development, Tim Cahill, said. IAI President and CEO Boaz Levy also hailed the development, describing the MOU as “yet another step in our strategy for cooperation with IAI. “Combining the development capabilities and the vast know-how of Lockheed Martin and IAI experience accumulated over the years in IAMD systems will create win-win opportunities for both sides,” Levy said.

To fully grasp the significance of the Arrow-4 project, it is important to understand exactly how it figures into Israel’s broader air defense system. The country employs a multi-level missile defense network. First, there is the iconic Iron Dome system for intercepting short-range rocket volleys of the kind fired at Israeli infrastructure during the recent resurgence of the Gaza conflict. Then there is David’s Sling for medium and medium-long range rockets and cruise missiles, as well as certain types of drones and high-flying aircraft. Next is the Arrow-2 system, specifically designed to repel short and medium-range ballistic missiles. The recently-introduced Arrow-3 is meant to take on more sophisticated, specialized targets, perhaps even serving as an anti-satellite weapon.

But Jerusalem sees even more advanced threats on the horizon, ones that its current missile defense array may not be fully equipped to handle. Israel’s renewed efforts to enhance its air defenses are spurred, at least in part, by the looming concerns of Israeli defense officials that Russian and Chinese hypersonic missile technology—whether in the form of hypersonic cruise missiles or glide-vehicle systems—could eventually be exported to or license-produced in the Middle East. The upcoming Arrow-4 could also provide a more efficient means of countering the growing threat of multiple independent re-entry vehicle missiles. It is unknown precisely what form the technologies necessary to mitigate these new threats will take on the Arrow-4 interceptor missile, which appears to still be in its early design stages.

Israeli defense officials expect the Arrow-4 missile system to replace the Arrow-2 over the coming decades, with Jacob Galifat, general manager IAI's MLM Division, said in a statement that the upcoming missile system will be the most advanced of its kind in the world. The effort is the latest in a well-established pattern of heavy Israeli investment into cutting-edge, class-leading missile defense technology, exemplified by the Iron Dome and Arrow series. With the Arrow-4 project, Israel is poised to remain a leading missile defense system producer for decades to come.