If the U.S. Military Never Built the B-52 Bomber Everything Would Be Different 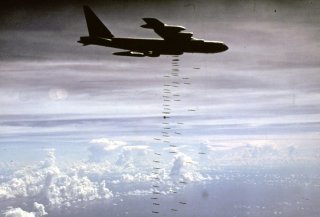 Here's What You Need To Remember: The cancellation of the B-52 would have left the USAF in a dire position.

The introduction of jet propulsion and of nuclear weapons transformed the procurement agenda and left the piston-engined Convair B-36 Peacemaker as the only viable transcontinental strategic bomber. But the B-36, which saw initial development in the early 1940s as an anti-German weapon, was clearly insufficient to the demands of the jet age. Thus, new design work ensued even as the USAF went to bat for the Peacemaker. The earliest versions of what would become the B-52 hit paper in late 1945.

The B-52 design underwent several severe design changes in its first two years, shifting from a straight wing piston-engined bomber to a swept wing jet-engined aircraft. But in December 1947 the project was very nearly canceled due to cost overruns and concerns about the viability of its engines. Several other firms offered viable (and no so viable) alternatives, and the survival of the Stratofortress was by no means assured.