India’s Navy is Expanding Before Our Eyes 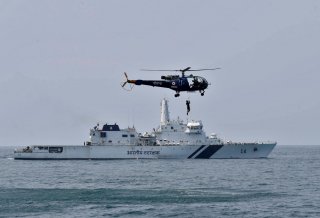 Here's What You Need to Remember: In the days of sail it was noted that the navies of the world were made up of “wooden ships and iron men,” and today the Indian Navy is embracing a similar tradition—one started by Captain Atool Sinha. The Indian Navy office has in the last four years covered 22,000 nautical miles on ocean sailing vessels as small as 56 feet or 40 feet.

When India became a republic in 1950, it was renamed again and became Indian Navy. Today, it now ranks as one of the world’s largest navies and it possesses one aircraft carrier with another under construction. It also operates an amphibious transport dock, eight landing ships, 10 destroyers, 13 frigates, and three nuclear-powered submarines along with more than dozens of other vessels.

Next year will mark the 50th anniversary of India’s victory in its 1971 war with Pakistan, and Indian news outlets have already noted how the small “brown water” Indian Navy proved instrumental in that conflict and how it has grown in the subsequent years. In the past five decades, India has seen its naval force grown from a regional “green water” naval force that had a small fleet of just 20 vessels, to now commanding a “blue water” navy with a 100-plus warship armada.

Such a naval force is crucial to India. The country’s vast coastline and evolving geopolitical situation with its neighbors—notably Pakistan and increasingly China—require that the nation put a much greater emphasis on maritime safety and security.

New Delhi is now continuing to invest in its naval forces, and last month, Union Minister of State for Defence Shripad Naik announced that expected orders for surface ships and submarines to be executed from 2020 to 2030 by the Indian Navy will be worth $51 billion.

During a virtual meeting of opportunities with the Goa Shipyard Limited (GSL) and Mazagao Dock Shipbuilders Limited (MDSL), organized by the Confederation of Indian Industry (CII), the union minister said that more than 60 percent of the Indian Navy’s budget will be dedicated to capital expenditure, and nearly 70 percent of that capital budget will be spent on indigenous sourcing.

In the days of sail it was noted that the navies of the world were made up of “wooden ships and iron men,” and today the Indian Navy is embracing a similar tradition—one started by Captain Atool Sinha. The Indian Navy office has in the last four years covered 22,000 nautical miles on ocean sailing vessels as small as 56 feet or 40 feet.

He has suggested that a “blue-water” navy can sustain itself only if the officers are trained on a first-hand basis, and he has continued training exercises to help prepare the next generation of Indian Navy leaders. According to The New Indian Express, he has trained more than sixty-one naval officers, including seventeen women officers. Among the seventeen are six officers who formed the all-women team that circumnavigated in a voyage that lasted 254 days, from September 2017 to May 2018.

“To understand the vagaries of nature, one has to be very close to nature,” Sinha told TNIE. “When you are out in the ocean and doing adventurous activities, it inculcates a level of camaraderie. It allows us to make better decisions. It helps us in making ourselves more aware of nature and to understand its wrath, and deal with its elements as it occurs.”

Clearly India is investing in warships and the sailors to crew them.