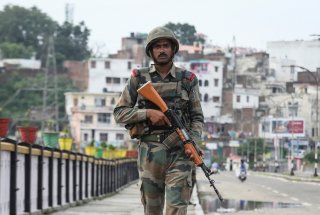 Here's What You Need to Remember: It has been described as an advanced, long-range non-lethal, directed energy, counter-personnel platform that can project a man-sized beam of millimeter waves at a range of up to 1,000. The U.S. military may have deployed such a weapon to Afghanistan but likely withdrew it before using it against any targets.

In what sounds like a story out of science fiction, the Chinese People’s Liberation Army (PLA) reportedly employed a powerful “microwave” earlier this month, and it wasn’t to heat up dinner for soldiers stationed in the Himalayas near the Line of Actual Control (LAC). Instead, it may have been used against Indian troops.

While essentially non-lethal, the microwaves were aimed at the Indian Army to make them violently ill and force their retreat. Within fifteen minutes of the deployment of microwaves the Indian troops began to flee, which reportedly allowed the Chinese forces to regain the ground.

The Asian Times quoted international studies expert Jin Canrong, who said Chinese troops used the electromagnetic weapon and it “turned the mountain tops into a microwave oven,” which caused the Indian soldiers to vomit. The paper reported that the “weapon” can heat water molecules in much the same way as a kitchen appliance, and it targets the water under the skin.

This could cause intense pain to those up to or even more than a half a mile away. Such an electromagnetic assault wasn’t intended to do lasting harm, but there have been concerns that it could damage a victim’s eyes and result in a potential carcinogenic impact. Jin suggested that the weapon was executed “beautifully” and was able to clear out the Indian soldiers without violating a ban on gunfire along the disputed border.

According to The Times of London, microwave weapons had been deployed in late August, in response to the deadly brawl between Chinese and Indian troops, which involved rocks and clubs and left some twenty Indian soldiers including a colonel dead. If the reports are true, this could mark the first use of such a weapon against enemy troops anywhere in the world.

However, the Indian Army has rejected the claims that microwaves were employed as “baseless and fake,” and disputed that China employed the technology near the LAC.

“Media articles on employment of microwave weapons in Eastern Ladakh are baseless. The news is FAKE,” the Indian Army said in a tweet, as reported by Indian Express.

History of Microwaves as a Weapon

The ability to use microwaves as a weapon has existed for decades. It is believed that the Soviet Union may have targeted microwaves against U.S. diplomats in the 1970s—and similar efforts were allegedly used against American diplomats in Cuba in 2016.

U.S. consulate staff in Guangzhou, China complained of a similar attack in 2017—which suggests that China may have the capability to employ such a system, even if it didn’t use it against Indian soldiers.

The United States Department of Defense (DoD) has also developed a microwave-style weapon, which is known as the Active Denial System.

It has been described as an advanced, long-range non-lethal, directed energy, counter-personnel platform that can project a man-sized beam of millimeter waves at a range of up to 1,000. The U.S. military may have deployed such a weapon to Afghanistan but likely withdrew it before using it against any targets. The DoD has also studied the ways that microwaves could be used against non-human threats, such as drones.