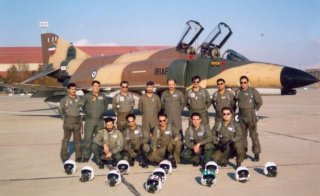 Here's What You Need to Remember: Although Iran’s American-made airframes are vintage-1960s and 1970s tech, with the right missile arrangement, they could still serve a valuable purpose within the Iranian Air Force.

The F-4’s greatest advantage was its speed—Mach 2.5+ in some circumstances, and its thrust. Although not terribly maneuverable, the F-4 could engage and disengage from fights virtually at will by accelerating away from the enemy. The airframe held a number of world records, including top speed, altitude, and climbing records.

According to the Defense Intelligence Agency, Iran and the Iranian Air Force maintain a “wide range of aircraft sourced from the United States, Russia, and China, including the U.S. F-14 Tomcat, F-4 Phantom II, and F-5 Tiger II…IRIAF missions include air intercept, ground-attack, and close air support, and some aircraft are capable of mid-air refueling. The IRIAF’s F-4s serves as Iran’s primary attack aircraft.”