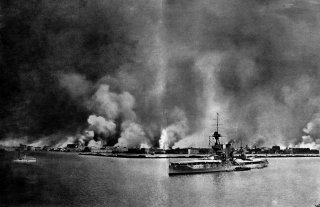 Here's What You Need To Remember: HMS Iron Duke became flagship of the Grand Fleet upon its creation in August 1914. Iron Duke carried the flag of Adm. John Jellicoe, who had been promoted by Winston Churchill to command at the beginning of the war.

Robert Farley, a frequent contributor to TNI, is author of The Battleship Book. He serves as a Senior Lecturer at the Patterson School of Diplomacy and International Commerce at the University of Kentucky. His work includes military doctrine, national security, and maritime affairs. He blogs at Lawyers, Guns and Money and Information Dissemination and The Diplomat. This article first appeared in 2017.